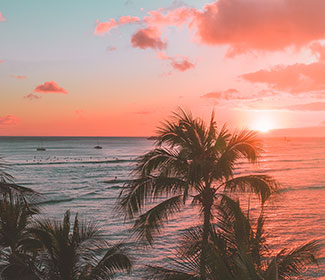 I was standing on the edge of a Hawaiian country road with the proverbial thumb stuck in the air signaling my need of a ride. Several months before, I had met the Lord. What I discovered was that not everything spiritual was of God. There is an evil element in the world that masquerades as good. I only wanted to know the truth.

With my bold young faith in God’s goodness and ability, I told God I wanted to know what was of God and what was of Satan. So, I stuck my thumb out and told God to take me where I could learn this truth. I knew he could do it. After all, he is God.

When a kind fellow picked me up and asked me where I was going, I said I wasn’t sure. When he picked up the next hitchhiker, I decided I would go with her.

Even though I had still never read the Bible, I had a faith in God that others remarked on. So, sitting cross legged on the grass, I bent my head toward the ground under a beautiful Hawaiian starry night and waited for these people to pray for the Holy Spirit to fall upon me. As they prayed, there came the presence of a very large hand on my back. I believed it was the Lord. I felt as if I were surrounded by a cloud of something full of life and pregnant with potential. Belief was easy for me in those days. I had a clean slate, no prejudices.

That was my introduction to the commune. God was indeed working there at that time, and he sent me there to learn. There were many wonderful things I learned with that group: how to pray, how to worship, how to study the Bible and how to yield to the Holy Spirit.

As time went on and I decided to stay with them, my ex-hippie naiveté was definitely troubling to them (yet many of them were ex-hippies). God’s Holy Spirit would speak to me, and I would just tell them about it like any child would share with her peers. At one of their meetings, a brother took me aside and told me that God told him I was called to speak forth God’s Word. For some reason, this scared me speechless. God had said the same thing to me already and I was not convinced it was a good thing, loaded with responsibility and hard inner work.

I lived and breathed prayer and communion with my Lord. I read and studied the Bible almost unceasingly; I was so thirsty. Thus, I “heard” a lot of things from God. During the informal meetings when people were sharing, I would pop up and say, “Guess what God said to me this morning.” I actually didn’t know it was unusual; I thought everyone “heard” God speak to them. I can still hear the silence that so often hung briefly after I shared my words. Finally, someone either affirmed my words (they could never find biblical fault with what I shared as from God), or else someone told me I was teaching and I shouldn’t do that. How could just sharing what God was saying to me be teaching?

One time God gave me a prophesy for the group about love and their lack of it. The founder of the commune was standing with a couple of the house leaders and snatched the paper out of my hands; he was going to expose the fallacy of it. He took his time reading it. Then grudgingly he had to admit that there was nothing wrong with it and agreed it was of the Lord, but that I should have had a man read it.

Not long after that, we were all instructed that women were indeed capable of being moved by the Holy Spirit and that if a woman thought she got something from God she was to have a man approve it and speak it to the group. We were also told that women could not speak things of the Bible to a man, even in witnessing. Women talked to women, men to men.

As a result, most of the women just gave up searching the Word and settled into accepting whatever the men handed to them. Holding a conviction contrary to what the men concluded was impossible, as to do so was to argue with or instruct the men and resulted in embarrassing corrections. Women could not speak to any man in a manner in which he might be learning something because women did not have the intellect to understand God’s Word.

With confused obedience, I did my best to honor these injunctions. I remember pulling the sleeve of a brother as God was strongly touching my heart with a word for the group during a meeting. Finally he listened to me and I explained what was on my heart. He thought about it. I tugged at his sleeve again. And again. Eventually, with some irritation he said, “You know, if God had wanted me to say it, He would have given it to me. But he gave it to you. You share it.” That was quite an astonishing statement.

We also were commanded eventually that women had to wear long dresses and let our hair grow long. Makeup and braiding hair was evil. Jewelry was considered the tinkling bells and jangling bracelets of a prostitute. The men were to protect themselves from the women’s natures and guide the women to be more holy. Women were not capable of becoming holy or understanding Scripture without the leadership and direction of the men.

One brother suggested that if 1 Peter 3:3-4 really meant that women were never to wear jewelry, then it must also mean that women must never wear apparel. That gave us all pause for thought. This was my first introduction that men could be wrong in their understanding of Scripture, something I long suspected. The real point of this scripture is that our adorning must be primarily of the heart and not in our appearances.

Then there was the veil issue. A scarf was a symbol of submission to men while praying. I remember one instance when I got home late from work and a prayer meeting was already going on. They were praying for a brother that I had already been praying for. I rushed into the bedroom to get my scarf. NO SCARF. Uh oh. SoI rushed around looking for that scarf; all the while the prayers for this dear brother were progressing.

I decided I would find a piece of cloth and make myself a scarf. That was not all that easy either. I was rummaging around looking for anything. Finally I found a piece of cloth and some scissors and cut a triangle to throw on my head. All the while I remember praying/talking to God, saying, “This doesn’t seem right. You are not like this, God, are you? Do you really care what I have on my head? I mean, I pray to you in the bathtub, God.”

I rushed out just in time to say almost the last prayer for my dear brother. After that, I took a deeper look at the Scriptures referring to the veil, and I decided that Paul was speaking about something happening in that culture and time that I had no way of knowing about. Also, it was a tradition, and verse 16 (from I Corinthians 11:2- 16) stuck it where it needed to be; if anyone contended, there was no such custom. But I continued to wear the veil for them. It lost its power of bondage when it became a matter of choice to honor their convictions instead of a burden I had to carry as a woman.

What would happen in the meetings was always a surprise. At one meeting, a leader sat in the middle of the room explaining the need of women to submit to men. Notice the plural. At one point his arm went up and down as he literally yelled that women were to “SUBMIT, SUBMIT, SUBMIT.” My skin crawled. There was such an unspeakable heaviness on the meeting. I left that meeting feeling laden down with a load I questioned whether I, or any woman, could carry.

I was trying to find the thread of truth in conflicting teachings. I believed that God was sovereign; after all he is GOD. Males are sovereign in my life; they must be, because they say the Word says so. Men commanded me that I didn’t have the intellect to discern truth and needed to trust their interpretation. So how could I trust that I was even capable of understanding what the men instructed? And how could God be sovereign if I could not understand him or his Word?

Finally, the clincher came. How could I know that my personal experience with God was real or not? As a woman who is easily deceived and doesn’t have the intellect to understand truth, how can I be sure of anything? Add to that the fact that men disagree on what God’s Word said. So, if I must trust a man, which men do I trust and how do I ever really know I have the right one? I am forever lost, never able to be sure of anything.

I felt great confusion come over me. I wandered in this blackness for days, struggling to find a way out into light. There was no hope. And then God spoke to me, reaching down into the depths of my being and the depths of this pain. “You need not that any man teach you, but the Holy Spirit will guide you into all truth.” Like a drowning soul I grasped the arm of that Word and hung on as God literally pulled me back to sanity.

On the strength of heart of that word I have spent the rest of my life always trusting God no matter what was happening, no matter what error I was in, no matter what men might preach. If God is for you, who or what can succeed against you? Nothing. God will always prevail in the end.

But the damage to my soul was not insignificant. Just last year (28 years later), an anointed man of God prayed for me, standing in the place of leaders who had wounded my heart, asking my forgiveness for specific errors. I was standing, but quickly bent over in wracking sobs as the pain leaked out of my soul. God was standing for me, acknowledging men’s errors for all to hear. God was on my side. God’s love healed the deep pain.

You might find yourself wondering how I feel about the Lord sending me to that place. I rejoice and praise Him for it. I learned lessons and truths that are priceless and well worth the struggles to learn them, even worth the deep battle wounds and scars. I am a better person for having gone through this. God knows what we each can handle. In a sense I asked for it. When I took my first steps in becoming God’s child, I told him I wanted him to make me into the woman he wanted me to become, because I trusted him. Even though I have often struggled against the lessons, through it all, I have learned to trust God more.

(Eventually the local community forced the commune to close due to its wrong teaching on God’s authority. The founder never acknowledged his error.)