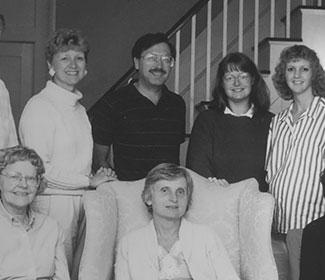 Christians for Biblical Equality (CBE) has come a long way in 15 years, according to Susan McCoubrie. As CBE’s first membership coordinator, she remembers when the organization’s membership information was organized in a recipe box on a TV tray.

“We were very hopeful, but we knew we were on an uphill battle,” said McCoubrie. “We had to continually prove ourselves as possessing a high view of Scripture.”

Since January 2, 1988, when CBE was incorporated as a nonprofit organization, the organization has grown by leaps and bounds, not only in the space required for record-keeping, but in influence as well.

When CBE co-founder and President Emerita Catherine Clark Kroeger approached Gretchen Gaebelein Hull about starting an organization about biblical equality, Hull said, “‘Oh no, we don’t need another organization.’” Hull said she initially didn’t see what Kroeger understood: “There were so many hungry women and men who needed an organization like CBE, and couldn’t get it elsewhere.”

While Kroeger and others had explored the need for an organization through several meetings in 1987, the first official planning meeting was held in August 1987 at Kroeger’s home in Cape Cod, Mass. At this meeting, CBE was born.

“We all felt the need to encourage people to not be weighed down by the culture in which we live,” said attendee Alvera Mickelsen, first chair of CBE’s board and editor of Women, Authority and the Bible. “I think the feeling was, somebody had to stand up and tell what the Bible really said. Everybody was tired of hearing the other [view] for so long.”

The group initially explored becoming an American branch of the British organization called Men, Women and God. In order to meet United States nonprofit requirements, they decided instead to form an independent organization called Christians for Biblical Equality.

Kroeger remembers the excitement of the early days, when they realized people were interested in this new organization. “We were just so thrilled when we got our first 100 memberships, we couldn’t believe it,” she said.

Several key moments led to CBE’s initial growth, and confirmed that its message was needed. For Mickelsen, one of these highlights was the organization’s first conference in July 1989 at Bethel College in St. Paul, Minn., with over 250 attendees. “Nothing like this had ever been done before,” Mickelsen said. “We were surprised at how many people came, and how much interest there was.”

Priscilla Papers was also an important voice for CBE. The first issues (which Kroeger calls “perfectly awful”) were published independently by Catherine and Richard Kroeger in 1987, when CBE was yet unformed. Hull became editor in 1989, and served in this capacity until 2000. Influential people in colleges and seminaries began to read Priscilla Papers, said Hull, because she worked to make it as accurate and true to Scripture as possible, which gave the journal credibility.

Another important project was the “Statement on Men, Women and Biblical Equality,” a document that Kroeger calls “our first solid piece of theology.” Kroeger and Hull, along with five others, drafted the document, which addresses biblical truths as well as applications. Completed in 1989, the document was published as an advertisement in Christianity Today in 1990. Letters poured in from this exposure, said Kroeger, which led to many new members.

“That statement gave expression to what thousands of us believed in a manner that was balanced, biblically based and theologically informed,” said Stan Gundry, who was one of the statement’s drafters. “It has come to be regarded as the defining statement of the movement.”

The organization received additional national coverage through a favorable column by Clark Morphew published in the St. Paul Pioneer Press. Newspapers around the country printed the syndicated article when they had space. Whenever many letters arrived from the same town, the staff knew that the article had been published in a particular location. “That was a tremendous push because it got us into areas where we wouldn’t have been known,” said Mickelsen.

From these initial key achievements, CBE’s membership has grown, and its operating budget and staff has more than quadrupled. An important organizational change that is linked to this growth, according to President Mimi Haddad, is the board’s transition from a decision-making board to a policy-making one. This decision grants the staff greater freedom to implement the mission of CBE.

This change, as well as the development of a strategic plan, was initiated by Virginia Patterson, chair of the board from 1995-2000. Patterson said the board, together with the staff, developed mission, vision and core values statements as well as areas in which they hoped to see results. They then projected goals and strategies to achieve the results, which has given focus to the ministry, she added.

The organization has also grown in influence, which can be seen in the resources available about biblical equality: Only a few books were available when CBE began, but now the bookstore carries over 150 books. This growth is significant for Hull, who says the resources represent credible scholarship published by reputable publishing companies.

CBE has also worked to make its message accessible to a wider audience. McCoubrie notes that CBE appealed largely to academics in its beginning, but that now the organization is also reaching the general Christian public. She cites the Internet, literature and CBE’s presence at popular conferences as efforts that successfully reach new audiences.

Important to Stan Gundry is the role CBE plays in supporting isolated egalitarians. Stan was asked to resign or be fired from his teaching post at Moody Bible Institute in 1979 after members of Stop ERA, a political action group, mounted a smear campaign against him and his wife, Patricia. The group hoped to persuade Moody to make a policy statement opposing the Equal Rights Amendment. The Gundrys were ultimately targeted because Patricia had written a book supporting women in ministry in 1977 called Woman Be Free. Because of the risks they have taken to promote biblical equality, Stan and Patricia received the Priscilla and Aquila Award from CBE.

As a result of CBE’s efforts, said Hull, even the discussions about women’s roles have changed. In the 1970s and 80s, traditionalists talked about “subordination” of women. Now they use the word “complementarity,” a term Hull used as she described biblical equality in her 1987 book Equal to Serve.

“Their minds have changed, and they’re moving much more in the direction of CBE,” Hull said. “It might not be apparent to younger people who say, ‘Why don’t we have a female pope?’ From my perspective there’s been enormous movement.”

This change in CBE’s acceptance also can be seen in the organization’s plentiful ministry opportunities, says Haddad. “People turn to us for vision and leadership, and rather than fighting for our right to be heard, we are more often welcomed and included as important members of the evangelical community,” she said.

Kroeger confirms that CBE has raised a voice that is listened to and respected. “We came from a place where no one was willing to buy into this,” she said. “We tried to be faithful in our witness; we tried to be prophetic; we tried to speak of issues of the Bible; and we got an acceptance.”

Vision for the Future

As CBE’s leaders look to the future, they hope CBE will continue to grow in important ways. In the strategic plan developed by Haddad, Patterson and the board, they identified four goals: promote egalitarian scholarship, popularize the message, produce greater market penetration, and establish a financially sound organization.

Haddad also hopes that CBE can become a support to women internationally. Marilyn Cramolini, a volunteer who duplicates audio tapes for CBE, shares this dream, saying she hopes CBE will be more prominent in “Afghanistan,” a term she uses to mean the places where CBE is most needed. McCoubrie also shares this vision to reach out globally, especially by training people who go to countries where women are oppressed and continuing to develop materials. “We need to be able to continually be on the lookout for means of service and means of contact,” she said.

In order to bring about further change, Haddad hopes to nurture the next generation of leaders. “We have to give what we can to CBE and then give it to those whom God would raise up to bring it forward,” she said. She also hopes this next generation will bring a wider outreach than the organization has known.

Given the growth Haddad has already seen, she said she has no question that it will continue. She has seen God’s faithfulness through organizations restructuring to include women and important research becoming available just as it’s needed. “[God] has been in the planning and executing of this ministry all along,” said Haddad. “I think we will reach the groups we want to reach.”

PrevPreviousLiving into the Hard Choices
NextGrowing a Multicultural OrganizationNext