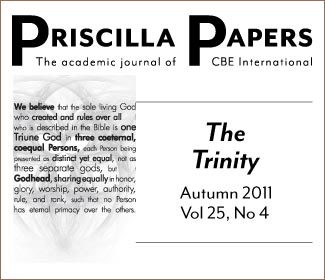 CBE and the Doctrine of the Trinity

Christians for Biblical Equality is an evangelical organization committed to the authority of Scripture in matters of faith and conduct. We set nothing above the authority of Scripture, but we consider the historic creeds as well as the Protestant Reformation and post-Reformation confessions to be sure and trustworthy guides to historic orthodoxy—what the catholic or orthodox church believes. We value these secondary authorities because we believe they accurately reflect the teaching of Scripture and give direction for what Christians should believe on matters where Christians have been divided over what Scripture taken as a whole teaches.

What the Bible says on the Trinity in brief

For Christians, what the Bible says on the Trinity, and specifically in a discussion related to the Father/Son relationship, is of first importance. In Philippians 2:5–11, Paul gives his most important explanation of how to understand rightly the Father/Son relationship. In eternity, Paul says, Christ, the Son of God, had “equality” with God the Father. Of his own free will and in complete harmony with the Father, he laid aside his divine glory, emptied himself, took human form, even the form of a servant, and obediently, as the second Adam, went to the cross for our salvation. In response to Christ’s own self-humbling, God the Father raised him to rule in heaven once more as God in all glory, power, and splendor. From this point on, Scripture clearly teaches that Christ rules as “Lord.” The New Testament places the affirmation that “Jesus is Lord” right at the heart of what it means to be a Christian. This affirmation or confession declares that the resurrected and exalted Son of God is God in the fullest sense and, as such, has absolute authority (Matt 28:18; Eph 1:20–21; Col 2:10). Often in the New Testament the ruling authority of the resurrected Son is spoken of as Christ “sitting at the right hand of God” (Acts 2:33; Col 3:1; etc.). In the book of Revelation, the imagery is different. The Father and the Son rule from the one throne “for ever and ever” (7:10–12, 11:15; cf. 1:6, 18).

Philippians 2:5–11 makes it plain that, in becoming one with us in our humanity, Jesus did freely subordinate himself for our salvation. There is, therefore, as Athanasius said long ago, a “double account of the Savior” in Scripture. Some biblical texts speak of him in his incarnate state. In these, he is obedient to the Father, prays to the Father, and exhibits human limitations, such as hunger, thirst, suffering, and death. However, he never ceases to be God, and many other texts speak of his Godlike prerogatives while he was incarnate, such as healing, forgiving sins, and raising the dead. In understanding the post-resurrection life of Christ in heaven with the Father and the Spirit, we do not read these human traits, limited to his incarnate existence on earth, back into his divine life in heaven. If we were to do this consistently, we would have the Lord of Glory in eternity getting hungry and thirsty in the late afternoon and sleeping at night! On earth, Jesus did obey the Father and was dependent on him as he lived out what it means to be a human being in perfect obedience and submission to God, but, since his resurrection and ascension, he is no longer the obedient, suffering Son of Man. He now reigns as God almighty with the Father and the Son. The Epistle to the Hebrews explicitly limits the Son’s obedience “to the days of his flesh” (Heb 5:7–8), as does Paul (Phil 2:8). Yes, a person of the Holy Trinity gladly chose subordination in becoming the man Jesus of Nazareth, taking the role of the second Adam who lived perfectly obediently and so won our salvation. But before and after Jesus Christ’s incarnation, the Bible makes plain that the Son of God is fully one with the Father and the Spirit, coequal God in all power, majesty, and might, worthy to be worshipped with the Father and the Spirit.

Working out what the Bible says on any doctrine is never a straightforward matter because often the Bible does not directly answer the questions in our minds, and, often, seemingly contradictory texts can be found. This was definitely true as the early theologians struggled to articulate the apostolic belief that there is one God, yet three persons. In the fierce battle between the fourth century church fathers and the Arian theologians, the central issue was: On whose side is the Bible?

In seeking to grasp and explain correctly how the God revealed in Scripture can be one and three at the same time, the earliest Christian theologians excluded three simple answers. First, they rejected the opinion that God was basically unitary, and thus the three “persons” were only the one God in three differing roles or manifestations (modalism). Second, they rejected the suggestion that the Bible spoke of three Gods united like members of a family, an opinion they thought breached divine unity (tritheism). And third, in the bitterest and longest-lasting debate, they rejected the idea that the Father, Son, and Spirit were ordered hierarchically. The Father was God in the fullest sense, the Son a little less so, and the Spirit less so again (subordinationism).

In this protracted debate, first in AD 325, the Creed of Nicaea was formulated and confirmed as a summary of what the Bible taught and should be believed. In 381 at the council of Constantinople, this creed was revised and re-endorsed.

The Creed of Nicaea and the Nicene Creed

The creed of Nicaea, ratified in AD 325 by more than three hundred bishops, declares that the Son is begotten as only begotten of the Father; that is of the substance (ousia) of the Father, God of God, Light of Light, true God of true God, begotten not made; one in being (homoousios) with the Father, through whom all things came into existence . . . who for us men and for our salvation came down and was incarnate and became man, suffered and rose again.1

In affirming that the Son is “God of God, Light of Light, true God of true God,”2 who is “one in being with the Father,” the Bishops at Nicaea endorse both divine differentiation and divine unity. The Son is God in the same way as the Father is God without any caveats, yet he is the Son and not the Father. In affirming that the Son “for us men [meaning men and women] and for our salvation came down and was incarnate and became man [meaning human] and suffered . . . ,” the temporal subordination of the Son is also endorsed. In juxtaposing these two truths—that the Son is “true God” and that he “came down, became man and suffered”—the Bishops at Nicaea agreed that the temporal subordination of the Son to the Father within the economy of salvation did not entail the subordination of the Son in the eternal or immanent Trinity. Virtually all Christians, Western and Eastern, take this creed as definitive of Trinitarian orthodoxy. More may be said, but not less.

In the so-called Athanasian Creed, composed in the late fifth century, that which is basically Augustine’s teaching on the Trinity is identified as “the catholic faith.” In this creed, the unity of the divine Trinity is to the fore, and any suggestion that the Son or Spirit is subordinated in being or authority is unambiguously excluded. Three clauses specifically deny that the Son is less than the Father in authority: “So likewise the Father is almighty, the Son almighty, and the Holy Spirit almighty. And yet they are not three almighties, but one almighty. . . . So likewise the Father is Lord, the Son Lord, and the Holy Spirit Lord; And yet they are not three Lords but one Lord. . . . In this Trinity none is afore or after another; none is greater or less than another. But the whole three persons are coeternal, and coequal.” The only difference allowed between the persons of the Trinity is that of differing origination, and this does not in any way imply subordination in being, work, or authority. Nothing could be plainer. The Athanasian Creed is emphatic. The Father, Son, and Spirit are “coeternal” and “coequal” God, and therefore indivisible in power and authority. Thus, it is asserted, “Such as the Father is, such is the Son, and such is the Holy Spirit.” Only in identity—one is Father, one is Son, and one is Spirit—and in origination—one is “unbegotten,” one is “begotten,” and one “proceeds”—are the divine three differentiated.

All Roman Catholics, Anglicans, Lutherans, and most Presbyterian and Reformed churches take this creed as definitive of Trinitarian orthodoxy.

The Reformation and post-Reformation confessions could not more emphatically affirm oneness in divine substance/essence and power, or, to use synonymous terms, oneness in being and authority, among the three divine persons.

The Augsburg Confession of 1530 states, “There are three persons in this one divine essence, equal in power and alike eternal.”

The Belgic Confession of 1561, article 8, says, “All three [are] coeternal and coessential. There is neither first nor last: for they are all three one, in truth, in power, in goodness, and in mercy.” The Son is neither “subordinate” nor “subservient.”

The Thirty-Nine Articles of the Church of England of 1563, article 1, says, “in the unity of this Godhead there be three persons, of one substance, power, and eternity.”

The Westminster confession of 1646, article 2, says, “in the unity of the Godhead there be three persons, of one substance, power, and eternity.”

The 1689 London Baptist confession, chapter 2, paragraph 3, speaks of “three subsistences” (i.e., persons) who are “one substance, power, and eternity.”

The Methodist Articles of Religion of 1784 says, “In the unity of the Godhead there are three persons, of one substance, power, and eternity.”