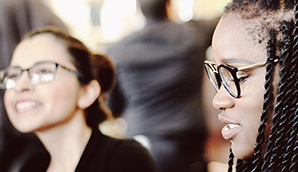 Calling All Deborahs, Esthers, and Junias

Women often underestimate themselves. We minimize our abilities and authority because we’re conditioned to think that to be a woman is to be passive and insecure. We accept the lie that confidence is worthy of censure in women and cause for praise in men.

Assertive women are often accused of being vain, proud, or deliberately rebellious. Observing this, many of us censor our words and actions to avoid appearing too aggressive or assertive. From a young age, bold girls are shamed for being “too bossy.” Strong women are punished for defying the patriarchal model for submissive womanhood.

Tragically, some Christian women defend and bolster patriarchy and some even persecute strong women, labeling them arrogant and sinful. Some women choose to strengthen the existing patriarchal paradigm, a system that affirms women for being passive—for being smaller, meeker, and quieter.

The world often encourages women to embrace deception and manipulation, offering them influence and power if they do. Some Christian leaders do the same indirectly, lamenting the dire consequences of women directly giving instruction or imparting wisdom to men. Instead of visibly flexing their God-given authority, women are taught to sway men in the shadows—to play games and exercise influence indirectly.

But God exhorts all believers to speak truth boldly and without fear. We must empower women to reject passivity and speak gospel truth boldly.

We have to stop feeding the monsters of inadequacy, fear, and insecurity. If we want to see women free, we have to challenge the message that passivity is godly. We have to encourage women to boldly exercise their God-given authority. And we must image Bible women who took direct action to further God’s vision for the world in our churches.

We need more Deborahs in the church. So great was Deborah’s influence that Barak, a male general, refused to go into battle without her!

We should deliberately image modern Deborahs who lead confidently and directly, who are unafraid to exercise their authority. Deborah was a model of biblical authority and a spiritual guide to an entire nation. We should be centralizing brave Bible women like her, and raising up Deborah-like leaders in the church.

We also need more Esthers in the church. As queen of a nation not her own, she had to be strategic and wise in flexing her authority. She brilliantly executed a divine plan, saving her people from genocide. She may have gained her position because of her beauty, but her bold advocacy saved her people.

There was nothing passive about Esther. Mordecai, Esther’s male relative, challenged her to act. But Esther acted as an independent agent. She bravely presented herself to the King uninvited, initiating a conversation, violating protocol, and risking both her position and possible death. The Jewish people intentionally celebrate Esther’s boldness every year in a festival called Purim.

We need more Junias in the church. Junia was a female apostle, the 21st century equivalent of a church planter. She traveled the known world to establish churches, find leaders, strengthen congregations, and encourage evangelism. Yet, the church still has a problem with women exercising this degree of spiritual initiative.

Many denominations are still unwilling to accept women as church-planting leaders and pastors. Even Christians who advocate for gender parity in government struggle with nominating a woman to be their pastor. We need to empower modern Junias to plant and shepherd new communities of believers.

If we hope to defeat patriarchy, we need to attack the unbiblical pressure on women to live passively. We’re teaching young girls to not exercise authority, to not question, and to just go with the flow. We have to stop shaming strong women and encouraging timidity.

Boldness is not a male trait. It’s God expectation for all believers:

Cast not away therefore your confidence, which hath great recompense of reward (Heb. 10:35).

God calls all believers to be a voice in the darkness. The church needs more Deborahs, Esthers, and Junias. So let’s commit to living courageously and confidently. Let’s challenge each other, fellow women of God, to rise up.

Gricel addressed this topic in her workshop: “In It Together: Widening Our Reach and Our Message” at CBE’s 2017 conference, “Mutual by Design.” Gricel Medina also offered a plenary lecture on “Reframing: An Architectural Design Thinking Process of 1 Corinthians 11:11-12.”