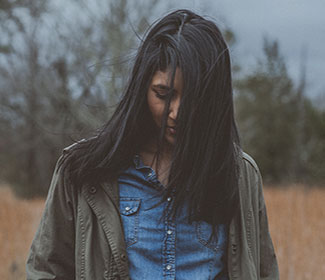 Body Shame Hurts Women and Limits Our View of God

Several years ago, dark spots began to bloom on the second and fourth knuckles of my hands. They didn’t hurt, but looked like deep bruises, like I’d one-two punched a wall with both fists. My therapist, knowing I was struggling to parent my teen sons, wondered if I would willingly share what happened to my hands, her query suggesting that maybe I’d let my sublimated rage venture too far.

Visits to separate dermatologists turned up nothing: the first did a biopsy which yielded no results; the second diagnosed the spots as “knuckle pads.” My mom, misunderstanding what I’d said about the diagnosis, told people I had contracted a case of “gorilla knuckles.”

Turns out, a bad bout of gorilla knuckles can cause significant shame. I quickly learned ways to hide my hands to keep inquisitive folks from wondering—aloud or in their heads—what had really happened to me. Experiencing embarrassment over my odd hands was not new territory for me, at any rate.

Since childhood, I’d been teased about the strange shape of my thumbs. The internet tells me I am affected with Brachydactyly type D, a genetic oddity that has flattened and shortened my thumbs. As a child—and lacking the knowledge of Google—I just knew I was abnormal and called “toe thumbs” by my brother and Thumbalina by my sister. Only those likewise affected (.5 percent of all humans) know the particular, albeit mostly benign, issues that come with quirky thumbs.

How I have hated these quirky, toe-thumbed, dark-knuckled hands! And not only these hands, but also the body to which they are attached, and through which I’ve lived a half-century as a woman. I have felt significant shame about my body: For the ways my body curves and does not curve. For the many times my short curly hair and athletic build made me seem too boyish to be called a girl. For the years of sitting through church programs, learning that my body needed to be hidden, that it might be too alluring for the young men sitting next to me. Or not my body, per se, but women’s bodies in general—because my body was not sexy enough to be tempting. I have hated my body for the shame I felt, believing that I never was female enough, especially when my femaleness has been defined for me and when I haven’t fit that definition.

I have my own particular kind of body shame, but most women have experienced similar mortification about their physical beings—a heritage of enmity with the structure of skin and bones and viscera in which we daily move. So much of our shame is learned, passed down from mother to daughter, from generation to generation, so that knowing how to hate our bodies becomes as comfortable as the heritage quilts we bequeath to our offspring, as the crocheted afghans we use to cover our maligned selves.

Western cultures convey messages about our bodies, telling us what perfection is in human form. Wave after wave of photo-shopped images remind us that the perfection to which we aspire looks like thinness and a thigh gap. Like white, wrinkle-free skin and luscious hair. Like able-bodied youth. And also, nothing like me.

Sadly, Christian churches have rarely provided sanctuary for our maligned bodies. The cultural artifacts of contemporary Western Christian culture remind us that godly women are modest and pure. For the price of a book, a Bible study, or a 30-day devotional, we can learn that biblical women need to stay pretty for their husbands, and that a warm make-up palette and colonic cleanse will help us become the Proverbs 31 woman. (This is honest-to-goodness truth. I read such advice in a Christian devotional I purchased on Amazon.)

From early childhood, Christian girls learn that Eve’s disobedience in the garden has made us all temptresses, that our womanly inheritance to deceive means we will use our sexuality to lure men into sin. One popular Christian writer tells little girls their bodies hold an important secret, one they must keep until marriage—and that too-tight tank tops and shorty-shorts will unveil that mystery, leading to impurity and ruin.

Like many Christian women, I come by my discomfort with my body honestly, through a lifetime of messages that women’s bodies were unworthy. I’ve held that discomfort tightly in my marred hands for most of my life. Every once in awhile though, I might loosen my grip, just a little, recognizing the problems inherent in telling women they need to buy this or that product to be acceptable.

The rational part of me can even acknowledge the lies Christian culture has told me as lies: That my body needs to be a certain kind of feminine to be godly. That my inheritance as a daughter of Eve means I will use my body as temptation. That my value is not in my head or heart, but in a body kept pure. I know these supposed truths are really lies, yet I still cradle them. I carry them around despite their emotional heft, reminding myself that when the Psalmist said we are fearfully, wonderfully made, he certainly didn’t mean me—at least not in my current corporal state.

How would our relationship to our bodies change if we had been given a different heritage? How might we live differently and more freely if we really believed our bodies are fearfully, wonderfully made no matter their shape, size, or ability? What would it mean to tell our daughters that their bodies are not the only gift they can offer the world, and that as heirs of Eve, they can receive strength and wisdom and agency, rather than deception? What would it mean to know that the extravagant diversity of women’s bodies reflects the image of our Creator, who breathed life into us and called us good? That knowledge alone might transform the world.

Growing up in the church, I heard the metaphor of hands used often to define God’s love for us, and our love for each other. We sang about the whole world being carried in God’s hands, and I could easily imagine my brother’s globe, cradled in giant palms. Our Sunday school teachers exhorted us to be the hands and feet of Jesus. My grandma had a picture of praying hands near the TV in her front room, and next to it an image of Jesus, knocking at the door, waiting to be let in. And, just above the divan on the back porch, she displayed another picture, this one of Jesus holding out his hand, inviting us to him.

In all those songs, all those exhortations, and all those reminders of Divine hands reaching out to love and care for us, I never saw anything but white, presumably masculine hands. The images I saw, such as my grandmother’s picture of Jesus in different holy poses, certainly did not disabuse me of my sense that God’s hands were strong, white, and male. Neither did our Sunday school flannel graphs or take-home worksheets depicting God’s intervention in biblical stories. His strength was nearly always figured in muscular hands, reaching down. And those giant palms I imagined holding a globe? The song was titled “He’s Got the Whole World in His Hands,” so the giant palms I envisioned were also masculine, also white, and also very strong.

When the idea of reforming women’s relationship to their bodies seems insurmountable; when it seems like we will never counter our culture’s messages about what female bodies should look like; when I wonder if I will ever love this body I’m growing old in; and when—because of it all—I despair, I think about how a simple change in my upbringing could have shifted everything. Imagine Sunday school stories where the flannel-graphed God was not always some big, white guy with strong hands saving the planet. Imagine singing songs using feminine metaphors for God. Imagine learning to think about God like a caring mother who tenderly cradles the world in her hands (or perhaps like a mother eagle or hen as described in Scripture?). Imagine the gift I might have been given as a child had I seen even one image of God’s hands reaching out to me in which they looked like my grandmother’s: strong and calloused from a lifetime of farm work, and with two short thumbs just like mine.

Imagine believing—really believing—that every part of me was made in God’s very image. That kind of knowledge, like I said, could transform the world, as well as our view of the hands that hold it.

PrevPreviousRevisiting Eden: Genesis 2 as a Description of the Creation Story
NextWe Need to Talk to Our Kids About Sexism at School: 4 Talking Points for ParentsNext