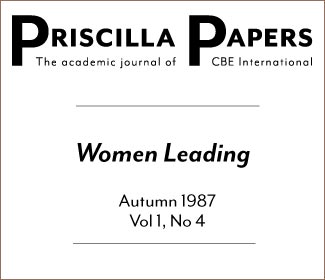 A Biblical Basis for Ministry

It is apparent that the Christian church is grappling with the issue of women’s roles in ministry. Many churches rely on conclusions not founded in Scripture as the basis for their policies. This article seeks to illustrate such inconsistencies and challenge each church to carefully examine the scriptures as the basis for their attitudes and policies regarding the contribution of women to the ministry of the local church.

Let me begin by presenting the situation behind my initial awareness of this issue. The daughter of an evangelist, I had an on-going rapport with my father concerning things of the ministry. He removed me from high school so that I could join him and my mother in full-time ministry. During those four years I helped him prepare sermons and gave feedback on his performance, sang solos and led singing, produced puppet shows, taught Sunday School classes and even led an evening service. I also joined him and other minsters in discussions about Greek passages, theology and general Christian practice. Later, after two years of Bible college, I came home announcing my intention to seek ordination. My father was horrified and denounced my decision as being opposed to Scripture. All further discussions ended in disagreement and I suspended my plans in confusion as I re-examined the Bible to see if his claim was true.

In contrast to this example, let me present another. My husband attended a friend’s church. He enjoyed the singing, prayer and worship, but felt that something was different about it. At the end of the meeting he realized what it was and turned to his friend to ask, “Why weren’t there any women involved in the service?” She explained that her church took the scripture “let the women keep silent in the church” (I Cor. 14:34) as their rule for the role of women in worship. Women did not preach, pray, sing or in any way speak in the church services. Although I do not support this point of view, I appreciate the uniformity of their policy and sincere desire to live in a way consistent with the Bible.

Such confusion on this issue is not unusual. Neither is the turmoil that it produces in women who feel called to ministry. I believe that the reexamination of the presuppositions behind our opinions is long overdue.

The task of defining the role of women in ministry has many aspects, the most important being that of basing policy on scripture; not allowing cultural norms, personal biases or unsound interpretation to block our clear view of God’s desire for the church in this matter.

Sound hermeneutics demands that we look at scripture to determine its meaning in the most accurate manner. This does not negate the ability of the Holy Spirit to reveal biblical truth to our hearts, but it gives us a framework in which to view a text that was inspired centuries ago. The reader must study the grammar and vocabulary of the first language of a passage as well as the social setting in which it was written, and all texts addressing a specific issue need to be examined in context before one comes to any conclusion on a governing principle for conduct.

The next step is to examine current church policy to see if it is in line with what we’ve determined from Scripture. Are these principles uniformly applied? Are there unsupportable exceptions? Do culturally preferred roles oppose those found in the Bible? Are there any expectations that women minister at all? What avenues have been laid out so that godly women know how to serve? Is teaching required to re-educate congregations on what God has called women to do in the local church?

Although such an effort is hard work, it is innate to our faith and brings about benefits. First, it requires closer examination of the Bible. Secondly, it demands scrutiny of our personal and corporate prejudices regarding women’s roles. Thirdly, it can alleviate the feelings of insecurity on the part of both men and women by clarifying expectations in stating a policy, giving us roles in which women know they will be affirmed by their local church body. It is vital that the resource of a willing sisterhood of Christians be acknowledged by their churches and freed by clearer policy definitions to serve their Lord.

Finally, it will force us to admit that there are some details over which we cannot agree. Perhaps such ambiguities will give us the opportunity to realize our finite knowledge of truth and help us rely on the Holy Spirit’s wisdom with the overarching power of love to bind us together in submission to one another as we serve Him. No group of people will ever fully agree with any conclusion, yet we must stand behind a corporate, prayerfully sought decision regarding women’s ministries so that our worship and community life will be orderly; a fit offering of praise to our God.

PrevPreviousEarly Evidence of Women Officers in the Church
NextTogether, Let’s Tear Down the Gender WallNext