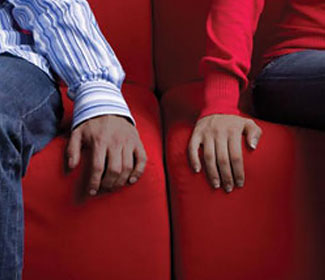 Luke had just returned from a conference in California. Our only contact over the past week had been a brief fifteen-minute phone conversation. The conference was going well, and he couldn’t wait to return and share the details. He was eager to see me again. The feeling was mutual. Even though at that time we were traveling through a difficult period in our relationship, I missed our daily conversations and his presence, his embrace.

The series of events that followed his homecoming are now somewhat of a blur. I remember the inevitable discussion about the conference. We were in my car, parked. Luke was in the driver’s seat. “I have to read you a letter I wrote while at the conference. Please let me finish. After I’m done, I want you to be completely honest with me about anything that goes through your mind.” An indescribable sense came over me; my body clenched a bit, my heart started pounding just a tad faster, and my stomach squirmed. Something didn’t feel right and I had no idea what he was about to read.

As I sat there in the passenger seat, I listened as my fiancé confessed to using pornography on multiple occasions throughout our relationship as well as to acting in other ways that I will refer to as violations of trust. I literally felt as though someone had punched me in the stomach. I could not create sound; I could not speak. My world, which had been recently rocking, felt like it was collapsing. The attempt to fight off tears lasted until he finished reading, and then I could no longer hold back the pain of my fresh wounds. The next two weeks were filled with grieving. Several times I broke down and bawled until I couldn’t breathe, until I gagged. I didn’t know what to think, what to do, or where to go.

Was I overreacting? According to culture, pornography is an acceptable component of a healthy sexual drive. And yet, the brokenness and pain we were both experiencing did not seem normal or healthy. Society’s acceptance of pornography, wrapped up in its definition of masculinity, is horribly skewed, and unfortunately the church has not been immune to such lies. But as Christians we need to find our standard for authentic masculinity in the Bible alone.

There is an amazing passage in the gospel of John in which Jesus’ behavior toward a hurting woman is contrasted with that of the Pharisees. These religious leaders and lawmakers often missed the point: they focused on objects rather than on people. In this way, they were as destructive and dehumanizing to those around them as those who use pornography today. They focused only on what built themselves up — what they needed — and therefore had no understanding or relationship with love.

At dawn [Jesus] appeared again in the temple courts, where all the people gathered around him, and he sat down to teach them. The teachers of the law and the Pharisees brought in a woman caught in adultery. They made her stand before the group and said to Jesus, “Teacher, this woman was caught in the act of adultery. In the Law Moses commanded us to stone such women. Now what do you say?” They were using this question as a trap, in order to have a basis for accusing him.

But Jesus bent down and started to write on the ground with his finger. When they kept on questioning him, he straightened up and said to them, “If any one of you is without sin, let him be the first to throw a stone at her.”

Again he stooped down and wrote on the ground.

At this, those who heard began to go away one at a time, the older ones first, until only Jesus was left, with the woman standing there.

Jesus is focused not on what the woman is accused of, but on the attitudes of the Pharisees. The scene reveals a desire for dominance and power. These Pharisees acted in a way to make themselves feel stronger, which resulted in the shaming and abusing of the accused woman. Today, this cycle is replicated all too often. Men assert their “masculinity” as selfishness and dominance, and women are objectified and belittled. Pornography is not the only way this process occurs, but it is one of the most tragic.

The big picture is this: men who watch women being abused are told by culture that they can easily switch back to the role of loving women with sensitivity and strength. This is a lie. Authentic masculinity arises from a place of egalitarian compassion, when respect and love replace domination and control. Yet, the Pharisees in this John 8 passage reveal their tired and accustomed trends: they exert what they consider strength by lording it over a woman who stands powerless before them. Their voices are all that matter, not hers.

A woman must understand that she cannot make her husband, boyfriend, or loved one stop using pornography. She can encourage growth, repentance, and transformation, but he must be the one who makes the choice.

The only person we can change is ourselves. For many women this is a hard concept. Often culture portrays women as loving nurturers who desire to help those who are struggling. We need to change this perception. We are not saying that women need to stop nurturing or caring about those they love. However, the way this is often perverted into glorifying women’s desire to “fix” others, particularly men, is an unhealthy error that we must confront. We challenge women to center inwardly and work on strengthening themselves, to work on seeing themselves as Jesus does.

Ultimately, the norms of male domination — expressed through pornography — are the opposite of authentic masculinity. Pornography imprisons women in the grasp of insecure and dominant men. Each time men domineer over women, they throw the first stone. But Jesus does what is most powerful: he stands up for the woman with all the power he has. He frees her.

Though John 8 doesn’t describe the woman’s face after her encounter with Jesus, we like to imagine it this way: After hearing Jesus’ words her head slowly rises. Instead of looking at the dirt she looks up for the first time. She sees the face of the one who loves her, recognizes her humanity. Her eyes tighten just a bit, and she stifles a tear or two. Her line of vision is clarified; gratitude is written on her face, a new strength is being written on her soul.

Confront your addiction with these four biblical principles.

Honesty
(1 John 1:9; 2 Cor. 4:2; Prov. 24:26)
Wholeheartedly admit your problem to God and to your loved ones. Take full responsibility for your actions. Be prepared for and welcome your spouse’s honest reactions.

Commitment
(Col. 3:5; Phil. 4:8–9)
Commit to stopping your harmful behavior. Commit to pray and daily depend on God. Commit to professional counseling. Commit to demonstrating to your spouse that she means more to you than your addiction. And commit to receiving the grace our Savior readily gives.

Accountability
(Rom. 12:1–2; James 5:16)
Follow through on your commitments. Seek accountability from trusted friends.

Sacrifice
(Phil. 2:3–8; Eph. 5:21; Rom. 12:9–10; Gal. 5:13–14)
Prove your love for your spouse through both words and actions. Allow healing to occur on her terms. Work daily to empathize with your spouse’s situation. Understand that forgiveness may not always include reconciliation, but seek after it anyway.