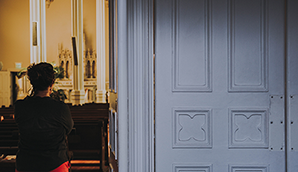 5 Definitive Signs A Church Is Invested In Women

I was thirty years old when I first met a female pastor. At the time, I was wrestling over a decision to quit my freelance job and attend seminary in order to pursue a long-denied call to pastoral ministry. A decade earlier, I was a college student and leader of a campus ministry, considering seminary as the next step in my calling.

I nixed the idea after considering what I thought were my options after getting a degree and going into debt: finding a male pastor to marry or resigning myself to a church job that women were “allowed” to hold. I had never been exposed to the idea of female pastors, and the leadership at my church was all male. I thought I had misconstrued my life trajectory, so I buried my convictions and became an entrepreneur.

Ten years, two kids, a husband, and a thriving photography business later, I sat down for lunch with Dana, a seasoned, female pastor. I listened and asked questions about her experiences in discovering her own calling.

We laughed about the stereotypes her husband sometimes weathered of being a pastor’s spouse, typically a position for a woman. Then, she told me to go for it—to lean into my calling despite the fear, to get a Master of Divinity and be ordained, and to put both on my business card because the church isn’t known for giving women leaders the benefit of the doubt. I would be doubly challenged as both a woman and Asian-American.

I credit Dana, among many other women and men, for the fact that I’m currently enrolled in seminary pursuing an MDiv. I am grateful to also be on staff at a church whose male pastors are committed to my development as a leader. That being said, I recognize too well the privilege both of those things are; many women are not encouraged to cultivate their gifts and are not empowered to pursue their callings, even within their own church community.

So, what does it look like for a church to move from theory around the empowerment of women to practical action?

Here are 5 practices of a church that empowers and invests in women, based on what I’m learning through current experience and being graciously taught about the church’s largely unheeded role in the development of women.

1. Church leadership actively proclaims the equality of women and men from the pulpit, in programming and in practice.

Practical change begins with ideological change. Many times, churches say they support women leaders in theory, but fail to back it up with any concrete change. True gender equality within the church certainly includes equal visual representation, but it shouldn’t stop there.

In a church that wants to empower women, issues that concern women are treated as universal issues. While having time for men and women to be separate is appropriate in certain circumstances, this should not be the only time the genders discuss issues that affect them. Even when we are not directly affected by gender issues, we are still responsible to bear one another’s burdens and, as Paul writes in Philippians, look to the interests of others, considering them more important than ourselves.

This also includes the tendency to glorify marriage and family life as the ultimate destiny for all. In a church that is invested in women, women are encouraged to pursue callings of all kinds, including motherhood, singlehood, marriage, workforce, and clergy, just like men are. While family life is important, it is not the only way to lead a God-glorifying life. Practically, this trickles down to young people, too; encourage and give opportunity to boys as well as girls to volunteer in the nursery, and give girls the opportunity to speak and lead publicly.

2. The church emphasizes the biblical siblinghood of women and men, instead of focusing on the opposite sex as merely “temptation.”

Without men who are willing to disciple and mentor women, women will continue to be at a disadvantage in the pursuit of ministerial calling. While there needs to be healthy boundaries and communication for any mentor/mentee relationship, women are disproportionately affected by the “Billy Graham rule”, in which people of opposite genders cannot spend time alone together.

3. The church intentionally asks women to be in positions of leadership—and keeps asking.

Women are in dire need of representation in church leadership. The pool of candidates for any position is undoubtedly majority male, for many reasons; it is harder to find women who are willing to step into leadership. But a church that is invested in women’s gifts should work to increase the number of women in leadership positions.

The internal struggle of self-empowerment for women, especially those who grew up in a complementarian culture, is also acknowledged. Many women will not ask for or create opportunities for themselves; and even if they are asked, several follow up asks might be needed. This intentionality also necessitates men stewarding their privilege by laying some of it down.

4. The church celebrates the female perspective in all of its diversity.

Femininity in leadership can be a double-edged sword for women; they are either “too soft” or “too strong” by cultural standards. In a church that celebrates women’s diverse gifts, women who lead are encouraged to do so from their own perspective, as femininity is wide and also reflects the character of God. Just as one race does not corner the market on understanding God, neither does one gender. A church that embraces both men’s and women’s perspectives is a church that is truly seeking a deeper experience of who God is.

5. The church recognizes and seeks to address the barriers women are more prone to face.

Because the current culture of leadership development advantages men, women tend to face more barriers when pursuing leadership in ministry. In some cases, women are expected to have higher degrees of education in order to be considered for the same position as a man. Equal opportunity for women in a church includes comprehensive options to address childcare and maternal health. The church should strive to give single mothers the same opportunity as a single man.

A church that wants to honor women invites women to decision-making tables to, at the very least, provide insight into identifying gender-specific barriers and influence the development of leadership pipelines.

Churches that want to see more women in leadership will proactively seek them out, empower them, and invest in their development. Let’s pray that we can rise to meet the challenge, for women’s sakes and for the cause of the gospel.

Tweet
PrevPreviousIt Is Well With Churches That Ordain Women
NextWomen in Scripture: A DictionaryNext