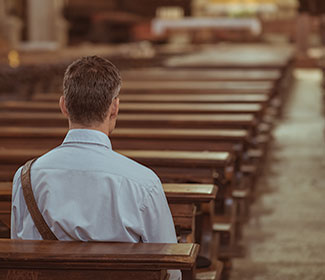 4 Ways Men Can Combat Abuse in the Church

Responding to accusations of sexual misconduct against actors James Franco and Aziz Ansari, Huffington Post cultural commentator Amaris Acosta wrote, “We’re still asking too much of women and too little of men.” When the famous men were accused of misbehavior, they and others, including a prominent New York Times writer, claimed they were only guilty of misreading women’s ambiguous sexual signals. Acosta goes on, “Both men and women have been complicit in gently defending men’s inability to read minds, saving their harshest criticism for the women at the receiving end of insensitive or abusive encounters.”

Acosta’s observation may be even truer of the church than society at large. #ChurchToo and #SilenceIsNotSpiritual have proven that, too often, our instinct is to blame the victim and assume the best of the abuser. Men receive standing ovations in some churches just for responding to allegations; whether they confess or deny misconduct appears almost irrelevant. It might be because Christians love a story of repentance and forgiveness more than the hard work of justice. Or, it might be because we want to believe the best of our leaders. Whatever the reason, we give accused men the benefit of the doubt and pat them on the back for even acknowledging that women have spoken. And, we easily question the integrity of women who speak out—though they have nothing to gain and everything to lose.

It’s no wonder that many women keep silent about abuse; they see that the church’s first instinct is to dismiss and explain away their trauma. Dramatic ovations also further victimize women who do dare to come forward, especially women of color. When you’re both a woman and a person of color, you often get the most blame and the least sympathetic ear. As a Latina pastor, I know the pain and rejection of being invisible and unheard. Of being viewed with suspicion while the actions of white male colleagues are judged as boyish mistakes.

Acosta concludes: “It is long past time to hold men accountable for failing to do the simple task of regarding a woman’s personhood and seeking not just enthusiastic, but affirmative consent. We cannot continue to baby the accused men by believing them to be incapable of thoughtfulness and emotional intelligence by nature.”

Men, I am calling you to step into your full humanity. To carry your weight in this movement toward the kingdom Jesus pronounced. Here are four ways you can start.

Change the way you talk about abuse

It’s time to stop diminishing the severity of abuse by calling it a “mistake” and treating it like an accident. Buying the wrong brand of bottled water is an accident. No youth pastor accidentally drives a teenage girl to a remote place and coerces her to have sex. When a spiritual leader or any adult takes advantage of a young girl who is vulnerable and naïve, that’s always assault. It’s criminal. It’s immoral. When we simply call abuse a “mistake” of the past, abuser are let off the hook and the truth is minimized. And, the steps we the church take when a victim comes forward will determine if other victims will feel safe to do likewise.

We also need to check how we talk about forgiveness. After her testimony in the trial of serial abuser Larry Nassar went viral in Christian circles, Rachael Denhollander spoke to Christianity Today:

I have found it very interesting, to be honest, that every single Christian publication or speaker that has mentioned my statement has only ever focused on the aspect of forgiveness. Very few, if any of them, have recognized what else came with that statement, which was a swift and intentional pursuit of God’s justice. Both of those are biblical concepts. Both of those represent Christ. We do not do well when we focus on only one of them.

Forgiveness—even when freely given—should never negate the legal ramifications of abuse. It’s counterproductive and harmful to force victims to make amends with abusers or forgive before they’ve had time to process the trauma. And, the pace and process of healing should not be determined by anyone but the traumatized person. Abuse must be reported to the proper authorities: law enforcement and hospitals.

It’s heartbreaking enough that Christian women and girls endure abuse by those they should be able to trust. We add to that heartbreak when we push them to forgive—either for the sake of our own comfort or so we can celebrate an abuser’s redemption. We demand forgiveness for the sake of everyone but actual victims. Instead, we must demand justice. We must prove—by what we say and how we respond to what others say—that we can be trusted with victims’ trauma.

Practice mutuality instead of patriarchy

Some Christians teach that patriarchy is God’s design. That God made men to lead and women to submit. But in the Garden of Eden, God created men and women to steward the earth together. There was no hierarchy between them until sin entered the story. We must arise with divine resolve against unbiblical narratives that fuel injustice.

Don’t buy into patriarchal views, but instead challenge them with mutuality. Ask questions about your theology and seek out spiritual mentors who see mutuality as God’s design in Scripture. Then, live out what you believe about Scripture.

Don’t insist on having the last word as the husband or being the sole decision-maker in your marriage. Think carefully about why you respond the way you do to women who challenge or differ from you. Is it because their position makes you uncomfortable? Would you respond the same way if a man said or did the same thing? If you’re a leader, give up the stage to make space for women. If you’re a pastor, teach mutual leadership and submission instead of gender roles.

In mixed gender groups, intentionally ask women for their opinions when they aren’t speaking. But also, consider why they may not feel comfortable sharing. Affirm women’s ideas and credit them. Don’t restate their ideas as your own or the group’s. It’s crucial to verbally recognize women’s creativity and ingenuity.

These are some of the everyday symptoms of patriarchy. Learn them and change your behavior. Challenge others to change theirs.

As a Latina pastor, I‘ve often been excluded from the decision-making table in the church. Because of that rejection, it took me a long time to be comfortable in my own skin. After much prayer and reflection, I realized that my story needed to be told. I found my authentic self and broke the chains of silence on my soul. My voice is important to God; it should also be important to my male colleagues.

Many women of color are no longer measuring their words or comparing themselves to their white siblings in Christ. They know they too have anointed stories to tell—stories of pain, stories of victory, stories of struggle, stories of strength, stories of valor, stories born in the trenches. Stop and listen their stories. Instead of becoming defensive when the stories of women challenge your experience and assumptions, allow yourself to be convicted.

Women are preaching and doing theology, too. Are you sitting at their feet and learning from them? Or is it easier for you to trust men (especially white men) because you feel like women and people of color are biased? In reality, the bias of white, male theologians is just as strong, and it’s even more dangerous because it comes from a place of power.

Abuse thrives and grows stronger when women are silent. When they speak and the world listens, sin is exposed; abusers are held accountable; and cultures are transformed. Encourage women to be tenacious in breaking the silence. Don’t look for reasons to ignore the truths women speak. Learn from women about Jesus and what it means to follow him, especially from women of color.

Hold men (including yourself) accountable

The church needs to hold men accountable—no matter how much influence they have. For centuries, the church has judged the sins of those outside our walls, yet we’ve ignored the sins within our own walls.

Let’s learn from the story of David and Bathsheba. David’s actions mirror the actions of abusers today in many ways. And, our attitude toward abuse is reflected in how we often tell this story, in that we blame the victim and fail to see the abuse.

Bathsheba is often portrayed as the villain, but she was the victim. She didn’t seduce David; he spied on her from his palace, then used his power to force her to sleep with him. When she got pregnant, David called her husband Uriah home from war, and told him to go home and sleep with Bathsheba (so that people would assume he was the father), but Uriah refused. So David sent him to the front lines, where he would be killed.

God sent the prophet Nathan to confront David. Nathan told him a story of “a man” who did exactly what David had done. But David was so blind to his abuse of power that he was unable to identify himself in the story the prophet told him. Men, have you been guilty of blaming Bathsheba? Have you believed that David’s only sin was having sex outside of marriage? Have you treated modern women’s stories of trauma and abuse by powerful men with the same disregard?

Have you supported leadership models that put all the power in the hands of a few men and make them accountable only to other powerful men? These male-only structures are dangerous for women. Work for gender-balanced leadership in your church, company, and organization. Promote accountability whether you’re in the office, locker room, or sanctuary.

It’s not enough to be outraged by the abuse around you. That’s a good first step, but your next move should be to examine yourself and those in your circles. Are you blind to the role that you, your leaders, your church, or your theology might be playing? Are your words or actions reinforcing a kind of manhood that treats women as less than men, whether with patriarchal theology or with sexist jokes and gender stereotypes? It’s time to confront not just the men “out there” but yourself and the men around you.

My call to men in the church is this: Don’t deny your own brokenness. Don’t reframe costly sins as mere boyish mistakes. Let us instead bring a prophetic word to abusers as Nathan did to David.

God, give us humble, open, and pure hearts. Empower us to work together for a better future. May we take responsibility for our own comfort with and complicity in the sin of abuse. May we, as one body, repent of our David-like blindness and take action to correct our assumptions and oversights. Amen.

This article appeared in the print version of Mutuality as “Long Overdue: 4 Ways Men Can Combat Abuse in the Church.”