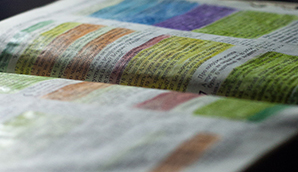 We just saw the end of January, the month of fresh starts and new beginnings. For many Christians, it also marks the beginning of an attempt to read the Bible in its entirety, from Genesis to Revelation, in a year. In light of that, I’d like to cover a few basic egalitarian principles that can help us read and understand the Bible.

In the past, reading Scripture was difficult for me because I was taught that Genesis established a God-ordained hierarchy between men and women in which men ruled. This complementarian understanding of Genesis led me to believe that the subsequent biblical accounts were evidence of God’s desire for strict gender roles and male leadership.

I couldn’t reconcile why God would create women in his image only to will that they be ruled by men. Why would God give women gifts and desires for the sole purpose of repression? When I became an adult, I was introduced to egalitarianism, which is the belief that men and women are created equally in God’s image and are to serve one another with their unique gifts.

I learned to read the Bible from an egalitarian perspective, and it changed my understanding of God, myself, and the world. The Bible came alive in a way it never had before. So in that vein, here are three egalitarian principles to employ when reading Scripture.

1. God’s original design for humanity was for men and women to rule the earth together as equal partners. This is made clear in the very first chapter of Genesis.

Here, both men and women are created in God’s image and given a mandate to rule the earth. No division of labor or hierarchy is mentioned. Rather, both the man and the woman are blessed by God and told to be fruitful, to increase in number, and to subdue the earth. They share a clear joint mandate as co-rulers.

2. From Genesis 3:6 on, the Bible is a story of brokenness. God’s work of human redemption and creation restoration is ongoing throughout history.

The consequences of sin, as recorded in Genesis chapter 3, aren’t God’s desire for creation. This includes Genesis 3:16:

“To the woman he said, ‘I will make your pains in childbearing very severe; with painful labor you will give birth to children. Your desire will be for your husband, and he will rule over you.’”

Male rule is a terrible consequence of sin and an indication of human brokenness. From the beginning, God did not intend for any human to rule over another. Male rule, fear, shame, pain, a cursed ground, and death are symptoms of that brokenness. The Bible’s account of history—female oppression, slavery, death, and war—is a reflection of broken humanity, not God’s redemptive will.

3. The original Greek and Hebrew provide clarity on the callings of men and women that is often lost in translation.

Thankfully, one doesn’t need to be a Greek or Hebrew scholar to gain a deeper understanding of what the Bible actually says about women in leadership and ministry. There are many online tools and resources for studying the Bible in Greek and Hebrew. Word searches are a great example. Simply pick a verse that you would like to understand better. For my example, I will use Romans 16:1, in which Paul speaks of a woman named Phoebe. Here is what Paul says of her:

“I commend to you our sister Phoebe, a servant of the church in Cenchreae.”

A quick word search of the word ‘servant’ in the original Greek reveals that the word being used is diakonos. It is translated as minister and deacon elsewhere in the Bible. Curiously, translators chose the title ‘servant’ for the woman in this passage.

Interestingly, 1 Timothy 3 lists qualifications for a deacon or diakonos, and the passage is often cited to keep women out of church leadership. A proper understanding of the Greek, however, shows that 1 Timothy 3 doesn’t ban women from church leadership. Phoebe was already a deacon or diakonos and was commended by Paul, who also instructed the church to support her. This meaning is easily lost in most English translations.

These three egalitarian principles gave me a new love and understanding of God’s Word. I suddenly saw God’s hand at work everywhere, calling men and women back to right relationship with God and with each other.

I encourage all of you to read your Bibles with these three principles in mind.

PrevPreviousMan Enough: How Jesus Redefines Manhood
NextBook Review: The Quest for Gender Equity in Leadership: Biblical Teachings on Gender Equity and Illustrations of Transformation in AfricaNext