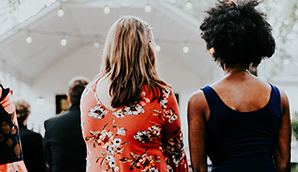 I am fortunate to belong to a global denomination that affirms and supports women in ministry. Since its official formation in 1908, the Church of the Nazarene has ordained women right alongside their male colleagues. I’ve often heard it remarked that Nazarene women could preach twelve years before they could vote in US elections!

However, even in a church tradition with a strong history of ordaining women into ministry, I have often seen and experienced what might be called “subtle sexism.” It is not blatant or overt. It is more like an undercurrent, silently churning beneath apparently calm waters. It ripples to the surface in indirect ways: through poor exegesis that does not take into account our belief that women are as equally called by God as their male counterparts; through careless comments and thoughtless remarks, often made by those same male peers; and in cases where my female colleagues in ministry struggle to find a pastorate because many churches would not consider hiring a woman as their lead pastor.

Unfortunately, this subtle sexism is typically more difficult to name and address than ostentatious displays of sexism and patriarchy. Many sincere and well-meaning people may not even realize they are engaging in subtly sexist practices. Because of this, I’d like to offer a few practical ways for churches to address this subtle sexism that is too often present even in egalitarian denominations:

1. Recognize the Power of Words

My close friend who is exploring a call to ministry recently told me about a comment her pastor made from the pulpit during a worship service. He offhandedly joked that someone was “pretty smart… for a woman.” While I’m sure this pastor meant for his joke to be lighthearted, quips and jabs like these illustrate the subtle sexism rising up in our midst.

I am a firm believer that our words carry great weight. What we say matters, and even things said in jest have the power to heal or destroy. The Bible also has a lot to say about our words. James compared the tongue to a spark that can start a wildfire, an untamed beast, and a deadly poison (James 3:5-8). Paul reminded us to let our speech “always be gracious, seasoned with salt” (Ephesians 4:6). Jesus taught that the mouth speaks from the overflow of the heart (Luke 6:45).

It happened when, in an interview for a youth ministry job, I was asked, “How are you going to relate the boys in the youth group?”—even though my male colleague who was being interviewed for the same position was not asked a similar question about the girls in the youth group. It happened when adults in my congregation referred to me as “Miss Shannon” or “Sister Shannon” instead of “Pastor Shannon.” And it happened when my female colleague was told by a male congregant that she is a pretty good preacher, “for a woman.”

While it may seem like a small issue, hurtful words like these can cause great damage in the life of a woman called to pastoral ministry. Being intentional about the words you use is a vital step toward empowering women for ministry in the church.

When I visit a church’s website for the first time, I head over to their “About Us” page to see if they have any women pastors listed on their staff. I look to see if women listed in children’s and youth ministry roles have a title like “director” instead of “pastor.”

If a woman is in charge of their music and arts ministry, I check to see if she is named as the “worship leader” versus “worship pastor.” If they do not have any women pastors on staff, it is probably not a church I would be interested in attending or even visiting. I think that is probably true for many other women perusing church websites attempting to find their church home.

If you are bringing on new staff pastors for your church, or are part of a committee searching for a new lead pastor, begin your process by intentionally seeking out the resumes of women candidates. If your church is a part of a denominational structure, ask your district or conference leaders to recommend both men and women for the open role.

Women pastors often face a vicious hiring cycle: their resumes are rejected because they do not have enough experience, yet they are unable to gain that experience because churches are not willing to take a chance on hiring them. Do your part to break this cycle and bring women leaders onto your pastoral team.

Even if you are a part of church with a small staff, or not in the position of hiring staff members, there are still many ways you can put women in visible places of leadership. Have women lay leaders read Scripture or offer the opening prayer during worship services. Make sure that when electing a board or committee, there are equal numbers of men and women nominated for the open roles.

Invite women preachers to lead revivals or provide pulpit supply. Invite young women in your youth or college-aged group to share their testimonies. Ask women to serve as Sunday school teachers and small group leaders. Select women and even young girls as communion servers. Tell the stories of women pastors, evangelists, and apostles—both those from the Bible and from contemporary contexts.

It requires extra effort to place women in front of your congregation, but even these small changes can help your people become more comfortable and at ease with women in church leadership roles.

I recently began listening to Malcolm Gladwell’s “Revisionist History” podcast. In his first episode, “The Lady Vanishes,” he tells the story of British artist Elizabeth Thompson. Her 1874 painting The Roll Call received the highest accolades that artists could receive in the 19th century—something that was virtually unheard of for female artists at that time.

However, because the art community celebrated this one painting by this one female artist, it in essence gave them a “pass” to never again honor another female artist in the same way. For many years, Thompson’s success closed the door for other women artists desiring to follow in her footsteps. Gladwell called this phenomenon “moral licensing.” I call it by a different name: tokenism.

Unfortunately, I see this same thing happening among women pastors and church leaders. My denomination recently elected a female general superintendent (the highest leadership position in the Church of the Nazarene). She is only the second female superintendent in our nearly 110 years. While I celebrate her election and know she is perfect for this role, I also fear that this may be a case where tokenism could easily emerge. Many may falsely believe that since we have one female general superintendent on a board of six, that it is “enough.” May it not be so.

I long for the day when putting women in pastoral leadership positions is no longer something that we make a big deal about. I am waiting for the time when it becomes normative.

Many have told me that we have to go through this “celebratory” stage before we can move on to shared male and female leadership becoming “business as usual.” Perhaps they are right.

But may we not allow our celebrations of women leaders to fall into tokenism. Let us not overlook the many other great women pastors because we have one or two in significant leadership positions. Let us not think that we have “done our jobs” and be satisfied with the status quo. We still have much work to do to overcome subtle sexism among our church tribes and continue to empower women for ministry at all levels of the church.