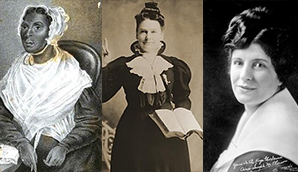 Women in history were faithful to their pastoral callings—against all odds. Many pursued ministry against the cultural tide of patriarchy in the church. These tenacious women are a vital part of our Christian legacy. But also, when we celebrate women pastors in history, we open doors wide for women in ministry today. With that in mind, here are ten awesome women pastors from early American history you should know. 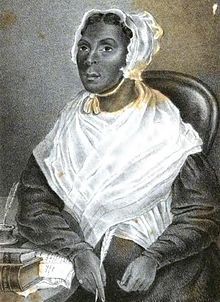 In 1819, Lee became the first African-American woman authorized to preach in the African Methodist Episcopal Church. She was also the first African-American woman to have an autobiography published in the US. Eight years after Lee heard God calling her to preach, she was finally able to convince her pastor to let her behind the pulpit. She beseeched him, “If the man may preach, because the Savior died for him, why not the woman, seeing he died for her also? Is he not a whole Savior, instead of half of one?”

Lee became a traveling preacher, moving from place to place on foot. She faced much opposition due to both her race and gender. In one year, she “travelled two thousand three hundred and twenty-five miles, and preached one hundred and seventy-eight sermons.” 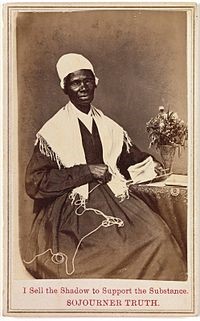 Baumfree was born into slavery in New York. She was repeatedly sold and suffered beatings and separation from her children. After her emancipation, she became a devout Christian and co-founded Kingston Methodist Church. In 1843, she took the name Sojourner Truth to signify her calling from God to travel and preach, telling her friends: “The Spirit calls me, and I must go.”

Truth spoke prophetically on the abolition of slavery. She is included in Smithsonian magazine’s list of the “100 Most Significant Americans of All Time,” and is also remembered annually in both the Episcopal Church and Lutheran Church calendar of saints. 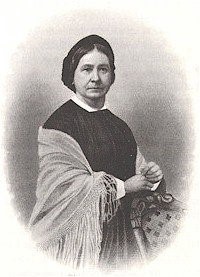 Born to a family of devout Methodists in New York, Palmer felt conflicted over her peaceful relationship with God. She yearned for something more. After losing two young children and believing it punishment for not fully devoting herself to God, she came to “see that the error of my religious life has been a desire for signs and wonders. Like Naaman, I have wanted some great thing, unwilling to rely unwaveringly on the still small voice of the Spirit, speaking through the naked Word.” She learned that by laying her life on the altar, she had full assurance of her salvation.

After this spiritual insight, she and her sister began holding ecumenical women’s prayer meetings, which began to multiply into similar groups around the country. Palmer became one of the most influential women in the fastest-growing religious group in America. She began to organize and preach at camp meetings, where approximately 25,000 people converted to Christianity. Her theology of the “altar covenant” was influential in the founding of the Church of the Nazarene, The Salvation Army, The Church of God, and The Pentecostal Holiness Church. Her book, The Way of Holiness was in fifty-two editions by 1867. 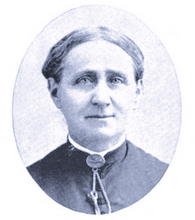 Blackwell was a precocious child living in Rochester, New York, who began preaching in her Congregational church at the age of nine. She was a school teacher for four years, saving money to enroll in Oberlin College, founded by Charles Finney and one of the first American colleges to train women in theology. Even so, her theology degree was withheld from her for several years due to discrimination against women in ministry.

Blackwell was a prolific writer and charismatic preacher. She eventually became the first woman to be ordained by a major American Protestant denomination in 1853. She continued preaching until 1915. Blackwell was also an abolitionist and early feminist, writing several books on women’s rights and equality. 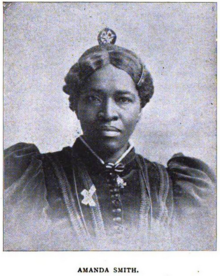 Smith was born in Maryland to a slave who was able to buy his family’s freedom. The Berry family resettled in Pennsylvania, where they became a station in the Underground Railroad.

After becoming a Christian, she joined the African Methodist Episcopal Church. In 1869, she received her call to preach and over her career, became a popular speaker at churches and camp meetings from Maine to Tennessee. Smith was much loved for her beautiful singing voice and inspired sermons. She became the first black woman international evangelist in 1878, working in England, Ireland, Scotland, India and several African countries for twelve years. 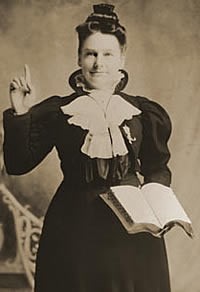 At thirteen years old, Woodworth-Etter converted to Christianity. She “heard the voice of Jesus calling me to go out in the highways and hedges and gather in the lost sheep.” Her denomination prohibited her from public ministry, so she found support in a local Quaker meeting.

In 1885, she began preaching and praying for the sick. Her healing meetings drew such crowds that she eventually purchased an 8,000-seat tent. She was pivotal in founding the Assemblies of God church in 1914, and in 1918 she founded what is today Lakeview Church in Indianapolis.

In 1916, Maria preached, “God is calling the Marys and Marthas today all over our land to work in various places in the vineyard of the Lord; God grant that they may respond and say, ‘Lord, here am I. Send me.’ … My dear sister in Christ, as you hear these words may the Spirit of God come upon you, and make you willing to do the work the Lord has assigned to you.” 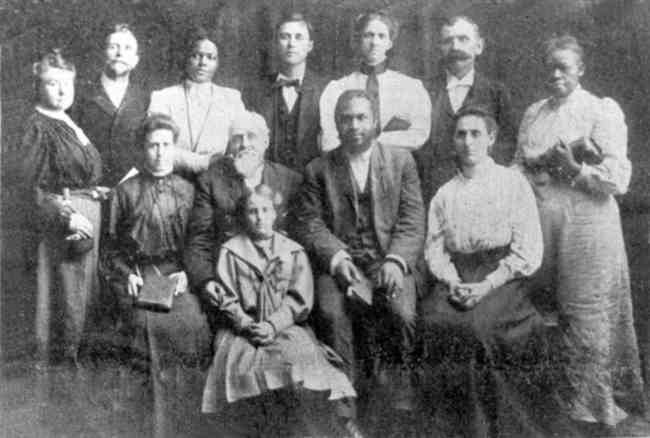 Farrow was born into slavery in Virginia, and was the niece of prominent black abolitionist Frederick Douglass. In 1905, she was the pastor of a Holiness church in Houston, Texas, when Charles Parnham of Bethel Bible College hired her as governess for his children. Farnham left her church in the care of a friend named William Seymour.

In 1906, Seymour asked Farrow to come to Los Angeles to teach glossalia to the people he was praying with for revival. Her arrival sparked what came to be known as the Azusa Street Revival. Her touch filled people with the Holy Spirit, and her ministry demonstrated healings and the power of prayer. From Azusa Street, her ministry spread throughout the Southern United States and to Liberia and West Africa. 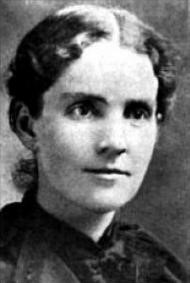 At the age of twelve, Woosley was “impressed to labor in the vineyard of the Lord, seeing the harvest was truly plenteous and the laborers few.” When she married, she hoped her husband would become a preacher, but he was not inclined to do so. Her own call became stronger and stronger. She read through her Bible, marking every place a woman is mentioned. At the end of her study, she was “convinced of the fact that God, being no respecter of persons, had not overlooked the women, but that he had a great work for them to do.”

For the next thirty years, her ordination was a source of great controversy within the Kentucky synod. She wrote a defense of women’s ordination entitled, Shall Women Preach?. Her ministry was marked by courage and tenacity in the face of harsh discrimination. 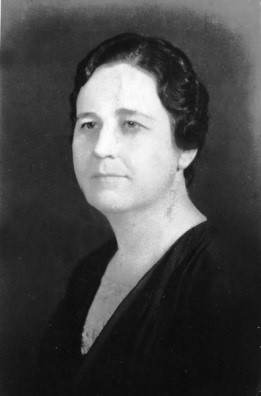 At the age of sixteen, Diffee became the youngest revivalist in the country. Despite being an effective evangelist, she once said, “I tried to be excused from answering the call to the ministry because I was a woman. I would not have minded if I had been a man, but to be called a ‘woman preacher’ was more than I could bear.”

In 1919, she was ordained as senior pastor of a Nazarene church in Amity, Arkansas, and went on to pastor First Nazarene in Little Rock. In twenty years, her congregation grew from under 300 to over 1,000. Diffee pastored for thirty-five years, and once said, “I urge young women to keep an ear turned to Heaven for the call of God to preach the gospel.” 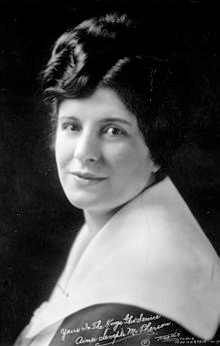 McPherson was already a widow at nineteen while serving as a missionary in China. She returned to America and married again, and was mother to two children at twenty-three when she was dying from appendicitis and heard God ask her, “Now will you go?” She understood she could choose ministry or eternity. She began her ministry as a traveling evangelist.

McPherson captured the attention of the media; she became one of the most widely photographed people at the time. A reporter once described McPherson’s sermons: “Never did I hear such language from a human being. Without one moment’s intermission, she would talk from an hour to an hour and a half, holding her audience spellbound.” She would preach twenty-two sermons a week, and was the first preacher to use the radio to broadcast sermons. She is considered the first celebrity pastor.

Inspired by her Salvation Army roots, McPherson required every church member to be involved in charitable work. During the Great Depression, the Angelus Temple fed 1.5 million people, and was considered the most effective charitable organization at the time. She once said, “What is my task? To get the gospel around the world in the shortest possible time to every man and woman and boy and girl!”

Join us in celebrating these courageous women of faith—today and every other day! Happy International Women’s Day!

PrevPreviousWe Need to Read Books on Women in History
NextEmbodying What Can Be: What Star Trek and Women Preachers Have In CommonNext