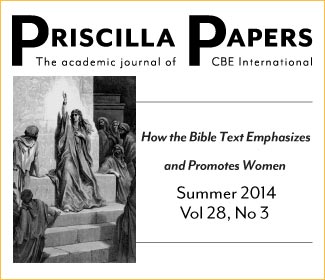 Now Deborah, a prophetess, the wife of Lappidoth, was judging Israel at that time. She used to sit under the palm tree of Deborah between Ramah and Bethel in the hill country of Ephraim; and the sons of Israel came to her for judgment. (Judges 4:4–5, NASB)

Thus begins the story of Deborah—and a primary reason why I am a biblical egalitarian. Shortly after I became a Christian in 1969, the “culture wars” over women in the church began to rage. Hierarchists developed a theological defense of female subordination centered on the creation order. This, I was told, was the traditional position of the church through the ages and could only be overthrown by a wanton disregard for Scripture. Male headship/female subordination (in the church and home) was absolute, for all times, and ordained of God. This was, however, a spiritual headship and did not apply to the world outside the home and the church. I would have accepted this reading of Scripture (initially) except for one big stumbling block. What about Deborah?

Like Samuel after her (1 Sam 3:20; 7:15), Deborah was both a prophet and a judge. The prophets of the Old Testament represented the voice of God to the people, outside the traditional corridors of authority. They did more “forth-telling” than foretelling, although they often did both. One could easily argue that, if there were ever a true theocracy, it was Israel under the judges. (In 1 Samuel 8:7, when the people clamored for a king, God told Samuel that the people “have not rejected you, but they have rejected Me from being king over them.”) Consequently, the office of judge carried with it both civil and spiritual authority. The Book of Judges makes it very clear that Deborah was appointed to leadership by God. No hierarchist has ever given a satisfactory answer to the question, “What about Deborah?” Why would God deliberately violate a principle he had established as inviolable?

Hierarchists often avoid the problem of Deborah altogether. When they do tackle it, they come up with a great variety of constrained arguments. None is convincing. Author and preacher John MacArthur omits Deborah from his book Twelve Extraordinary Women, How God Shaped Women of the Bible and What He Wants to Do with You. In his treatment of Anna, MacArthur argues that Anna recognized Jesus as the Messiah because she “overheard” Simeon. Women do not ordinarily receive any special revelation from God, nor are they a source of authoritative revelation, he claims. However, he acknowledges Deborah as a possible exception, but only because God used her as a rebuke to the men in her generation. He insists that Deborah did not hold a prophetic office or ongoing ministry as Elijah and Isaiah did.1 These arguments are rife with assumptions not substantiated in the text.

In spite of the statement in Judges 2: 16-18 that God raised up each of the judges, many contend that Deborah was God’s “fallback” choice. One author states, “So it would appear, there may be unusual circumstances when male leadership is unavailable for one reason or another. At such times God may use women to accomplish his purposes even as he used Deborah.”2 I find this to be a straightforward denial of the sovereignty of God and in clear contradiction to the biblical record. Others assert that Barak was the true judge in this story because Deborah is never referred to specifically as “savior” or “deliverer,” as are many of the other judges. These words, however, are never used for Barak either!3 Thomas R. Schreiner uses circular reasoning and assumptions to assign Deborah a “private” versus “public” position in ancient Israel, concluding that, whatever it was that Deborah did, she did not rule over men.4 All these arguments ignore either basic principles of exegesis and/or plain logic.

The facts are that Deborah is the only judge (in the book of Judges) who was also a prophet, and she is the only judge who we know served in a judicial capacity. Even the grammar of the text departs from the normal Hebrew word order to emphasize her position as a leader.5 The similarities between Deborah and Samuel are striking. They are both identified as prophet and judge. Deborah appointed Barak to lead into battle while Samuel appointed two kings who also led into battle (although he did not go). Deborah held court in Ephraim between Ramah and Bethel, two places that would later become closely associated with Samuel. In conclusion, Deborah was a public figure who exercised both temporal and spiritual leadership and was chosen by God to deliver the Israelites from oppression and to bring peace to the land for forty years.

Accepting Deborah as both a judge, an office that embodied civil and spiritual authority, and a prophet is especially difficult for hierarchists. One author admits that, as a prophet, Deborah spoke (and speaks, through Scripture) with “absolute authority” over all people. However, he also argues that the Old Testament role of prophet no longer exists, implying that Deborah, as prophet, is not a model for Christian women today. He states, “God teaches us in his Word that men are given leadership in the family and in the church, which is the family and household of God; but the Word does not teach that all men have headship over all women in all circumstances. Thus, Deborah is a judge and a ruler. Would it bother you if Deborah was to become your President, governor, mayor, senator, member of Congress, or Supreme Court Justice?”6 He seems to believe that the story of Deborah is consistent with the assumption that women may exercise authority over men in the civil realm, but not in the spiritual realm—an artificial distinction during the time of the judges. In the end, Deborah’s story is still at odds with the argument that female subordination is an absolute dictum, grounded in the created order. If, in fact, male (spiritual) headship is God’s inviolable decree, Deborah, as prophet and judge, is an aberration, whether in New Testament times or Old.

The “problem” of Deborah, as it is resolved by Luther, Calvin, and most pre-nineteenth-century theologians, is not completely satisfactory either, but is more coherent and consistent than contemporary hierarchist solutions. As I have argued in a previous article (and book),7 most prominent pre-nineteenth-century Protestant theologians believed that the creation order dictated the subordination of women in the temporal realm, but not in the spiritual kingdom of God, represented on earth by the church. They might observe male headship/female subordination in the church, to honor “the order preserved by the world”8 or out of modesty and “decorum,” but spiritual hierarchy was not organic to the church. To these traditionalists, the primary problem that Deborah presented was her role as judge representing civil authority. Consequently, they placed a spin on Deborah that was quite different from the contemporary hierarchists. For instance, Puritan exegete Matthew Henry argues that the story of Deborah is about spiritual authority, not civil authority:

She [Deborah] judged, not as a princess by civil authority conferred upon her, but as a prophetess, and as God’s mouth to them, correcting abuses and redressing grievances, especially those which related to the worship of God. The children of Israel came to her from all parts for judgment, not so much for the deciding of controversies between man and man as for advice in the reformation of what was amiss in things pertaining to God.9

He sees her primarily, if not exclusively, as a spiritual authority. Likewise, most pre-nineteenth-century theologians recognized the possibility of female leadership in the church.

Luther, in his concluding words on 1 Timothy 2:9–15, says, “If the Lord were to raise up a woman for us to listen to, we would allow her to rule like Huldah.”10 Calvin places Deborah in a category of women who are supernaturally called by the Spirit of God. “He who is above all law might do this,”11 contrary to the ordinary law of nature. None of the traditionalists saw female subordination in the church as an absolute. Most acknowledged the possibility of a woman (such as Deborah) having an extraordinary call from God, though John Wesley may have been the first to recognize specific women when he extended “the right hand of fellowship” to Sarah Mallett and Mary Fletcher, preachers in the Methodist connection.12 Many evangelical clergymen during the eighteenth- and nineteenth-century revivals in America supported more than one hundred known female evangelists, exhorters, and preachers. Deborah served as a model for all these women.

The Protestant Reformation introduced widespread literacy for the first time in human history. By the seventeenth century, the number of women who left records of their thoughts, prayers, and aspirations was beginning to grow. Many ordinary women raised their voices in the public sphere during the eighteenth-century Great Awakening and the revivals of the nineteenth century, paving the way for the early women’s rights movement. Catherine Brekus’s fascinating book Strangers and Pilgrims, Female Preachers in America, 1740–184513 reclaims the voices of Christian women for the historical record. What she discovered in her painstaking research has much to do with Deborah.

Brekus records the pattern that emerged. As revivals died down and new churches began seeking greater respectability, female exhorters and preachers, who at one time had been encouraged to “improve their gifts,” were banned. The record of their work was omitted from Christian periodicals and deliberately removed from denominational histories.14 Consequently, when later revivals broke out, a new generation of female preachers and evangelists had no knowledge of those who had gone before. They found their encouragement in the timeless biblical stories of women such as Mary Magdalene, Anna, and Deborah. This pattern of disjunctions and new beginnings continued into the early twentieth century. Deborah remained a primary inspiration, mentor, and model to those who had no access to their own histories. Female leaders in revival were sometimes referred to as “Mothers in Israel,” another interesting facet of Deborah’s powerful influence:

Although some historians have accused nineteenth-century Protestants of disempowering or “domesticating” women by emphasizing their motherhood, these sects [evangelicals] did exactly the opposite. By borrowing the title of “Mother in Israel” from the pages of the Old Testament, they implicitly expanded the definition of what made a woman virtuous. There are only two “Mothers in Israel” mentioned in the Bible, and both were powerful women who took on leadership roles outside of the patriarchal household.15

Of these two, Deborah was the most significant (Judg 5:7).

Finally, we should remember that one of the subthemes of Judges is that God chooses whom he wills. God’s criteria for leaders differs from humanity’s criteria, whether that judge be left-handed, like Ehud (left-handedness was considered an evil omen in ancient times); the youngest son of the least important tribe, like Gideon; or a woman, like Deborah.

So, what about Deborah? Her story is one of those places in Scripture where God breaks into history with a new order—a kingdom where the first shall be last and the last shall be first. There is much about Deborah to know and to celebrate. She remains a mentor and model for Christian women and men everywhere. As Mary exclaimed in her Magnificat, “He has brought down rulers from their thrones, and has exalted those who are humble.” Deborah is a vital part of the good news we have in Jesus Christ.