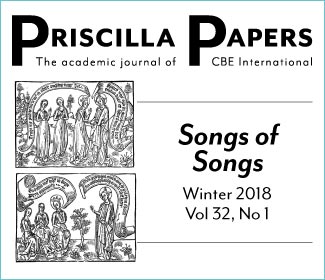 A Review of Commentaries on The Song of Songs

The Song of Songs stands alone among the books of the Jewish and Christian canons as an unabashed exploration of sensual human love. Yet this interpretation was repressed for centuries, and the Song was instead read allegorically. Tremper Longman’s commentary notes evidence of early arguments that the Song deals with God’s relationship with humanity, and by AD 100, the allegorical interpretation was firmly established: Jews believed the poem reflects the relationship between God and Israel or between God and the individual soul; Christians followed suit, claiming the lovers’ romance symbolizes Christ’s love for the church. However, Cheryl Exum, Richard Hess, and Longman join a consensus of modern scholars who reject an allegorical interpretation, and they do so for similar reasons. Allegory assigns arbitrary meaning to poetic images: for example, Rashi, a medieval rabbi, suggests the woman’s breasts in 1:13 represent the cherubim that stood over the ark; Cyril of Alexandria believed that the breasts represent the Old and New Testaments. However, Exum, Hess, and Longman argue that the most significant problem with an allegorical interpretation is that it suppresses the Song’s clear literal meaning—erotic love. Allegory, Longman writes, imposes a “foreign meaning” on the text (22). Each of their commentaries emphasizes different aspects of the Song, but all of them regard it as a joyful celebration of human love.

Exum sees the entire poem as a movement toward the climactic statement that “love is as strong as death” (8:6), and she regards the Song as a unified whole. Hers is a systematic study of male and female gender differences and the role they play in the Song. She praises the poet’s literary skill, through which the two lovers represent all lovers, and “ultimately, love itself” (3). The Song, she avers, is sensual, but so clothed in poetic metaphor that it encourages aesthetic appreciation while it discourages voyeurism. Longman describes the Song as poetry that reveals the power of love as well as its pain, and he sees it as an anthology, a sort of “erotic psalter” (43). He maintains that the Song deals with sexual love strictly in the context of marriage. Although he rejects an allegorical interpretation, he claims the Song’s theological message focuses on the marriage metaphor: in the Bible, the relationship of husband and wife is often an analogy for the most important relationship of all, the relationship of “God and his people,” Longman writes (xiii). Hess agrees that the Song is “sublime love poetry” (34), and he sees it as a unified collection. Like Exum, he believes a literal interpretation frees the lovers’ enjoyment of their sexuality from allegorical censorship without cheapening it in any way. But unlike Exum, Hess finds a clear and compelling theological message in the poem: the couple’s experience of human love is a “signpost” that points to something greater—to “the One who is love” (107). Hess notes that the Greek translation of the Hebrew text renders the Hebrew word for “love” in the Song as agapē, and this, he asserts, forms the basis of the NT understanding of God’s love for believers. Though all translation involves interpretation, and the use of agapē rather than the Greek alternative eros may simply represent an early attempt to allegorize the Song, Hess affirms the poem’s importance for Christians today: in a fallen world, where the first couple was banished from the garden of Eden, the Song gives hope that couples may recover some of that garden and see their love as a good gift from God.

Exum, Hess, and Longman discuss the Song in relation to ancient Near Eastern love poetry, particularly Egyptian love lyrics, but all three commentators observe striking differences as well. Unlike other ancient love lyrics, the Song consists entirely of dialogue, and the woman’s dominant role is unique: the woman initiates the action and openly expresses her feelings. This characterization has led feminists to hail the Song as an expression of sexual equality in a culture dominated by patriarchy, Exum explains. Because the poem describes being in love from both a woman’s point of view and a man’s, it portrays gender relations as “fairly egalitarian,” Exum writes (68). But, she adds that we cannot know how accurately it describes actual gender relations in ancient Israel. The scriptures primarily reflect the views of those who held religious and political power—the male elite. So while the Song challenges some ancient Israelite gender roles, it reinforces others, Exum contends.

Nevertheless, patriarchal attitudes are apparent. The woman’s brothers try to control her sexuality, and her chastity is an issue (8:8–10) but the man’s is not. The man has freedom of movement and social autonomy (2:8–17), but the woman does not. It is the woman, not the man, who suffers for love at the hands of male authority (5:7). The Song of Songs sees desire and sexual pleasure as mutual, and it affirms a woman’s effort to gratify her desires, Exum observes, but suggests that the poem may have been written to encourage young women to marry despite the burden marriage and childbearing imposed on women in the ancient world. And while the Song celebrates a woman’s erotic power, elsewhere in the Bible men sometimes try to control it. Exum alludes to Phyllis Trible (God and the Rhetoric of Sexuality [Fortress, 1978]), who argues that the Song as a whole, and 7:10 in particular, reverses the consequences of sin in Gen 3:16 and redeem human love from the distortion of the fall. But Exum believes 7:10 is merely a variation of the refrain of mutual possession in 2:16 and 6:3. In short, she is ambivalent about the Song of Songs as an egalitarian text, and concludes that it can be “hazardous to a feminist’s critical faculties” (81).

Longman seems to affirm male and female equality, and he reads the Song as an egalitarian text. Like Exum, he notes the woman’s dominant role in the poem, and he points to the mutuality of desire and pursuit. Longman agrees with Trible’s claim that the Song reverses the consequences of the fall and restores love’s harmony and balance, and he discusses Trible’s thesis in detail, but his comments on the word “desire” (teshuqa in Hebrew) might give the reader pause. Teshuqa occurs only three times in the OT (Gen 3:16, 4:7, Song 7:10), and Longman cites an intertextual link between Gen 3:16 and Gen 4:7, where sin’s desire for Cain is “crouching at the door, desiring to overtake Cain.” Women, Longman insists, have a similar desire to dominate and control men. But scholars such as Joel Lohr and Susan Brayford have studied teshuqa carefully and do not see the woman’s desire in Gen 3:16 as domination. Trible’s view—that the woman desires to return to the intimacy and mutuality she enjoyed before the fall—is probably more correct. Longman’s admission that Trible might not approve of his use of her material reflects both academic honesty and perhaps understatement as well. He alludes to Hos 2:2 and Ezek 23 matter-of-factly, apparently insensitive to the effect the stereotype that women are more prone to sexual sin than men may have on female readers. Thus his contention that the marriage metaphor is a theological theme in the Song, and his use of masculine pronouns when referring to God, compound his potential to be off-putting to certain readers.

Hess is enthusiastic about the Song, and he affirms that its impact must be understood in terms of full gender equality and independence. It is the woman who speaks first and her words contain imperatives for her lover and for others, Hess observes; the woman’s role as speaker and actor dominate the poem. Hess dismisses David Clines’s claim that the Song is “soft pornography,” written for men’s entertainment and allegorized to secure its place in the canon (20), and he is unmoved by Exum’s concern that the Song may not reflect the reality of life in ancient Israel. As a piece of poetry, the Song reflects reality even as it creates a reality of its own, Hess remarks. He agrees with Trible that the patterns of domination and submission established in Gen 3:16 are clearly missing in the Song: love, once perverted, is now redeemed. The man and woman are naked but unafraid. Despite the Song’s erotic content, it does not condone free love; nor does it describe marriage, Hess maintains, though the lovers’ total commitment to each other and the frequent occurrence of the word “bride” in the text hint that the society in which the lovers lived expected marriage. What the Song does do is demonstrate that sex is not “inherently evil” and not limited to procreation (35). Human sexual love is a gift from God, one that reflects a greater love, the love of God for humankind, Hess concludes. His excitement is so contagious that readers might not notice a few flaws in his work, such as his use of masculine pronouns in reference to God, and the fact the he claims the woman and the man in Gen 3 are cursed by God, when it in fact it is only the serpent and the ground that are cursed (Gen 3:14, 17). To his credit, Hess acknowledges that the lovers, who enjoy physical love as something created by God and therefore valuable, are celebrating not God but rather, creation; from a theological perspective, this is “incomplete,” he writes (74). However, the entire text of scripture addresses this deficiency, he adds, and rightly so, for it takes more than physical love to save one’s soul; it takes Jesus Christ.

Exum has the best interest of women at heart; she is cautious and acutely aware of the complexity of the text as well as the persistence of patriarchal influence in both its composition and interpretation. The Song may affirm gender equality in physical love and romance, but it is silent about gender relations in all other spheres of human life, Exum contends; the poem “does not move beyond courtship and more intimate erotic encounters to describe other aspects of women’s and men’s day-to-day lives” (67). Longman says the Song of Songs portrays sexuality as “redeemed” and describes the healing of intimacy, but he adds that human redemption is not fully accomplished; it is an “already—not yet” proposition (66). He writes for professional clergy and serious Bible students, but his commentary may reflect the tendency of some modern scholars, pastors, and church members to attempt to embrace gender equality, though inadequately. Readers who consult Longman are encouraged to examine other commentators as well for a balanced view of the Song and its portrait of gender relations. Hess’s book, intended for scholars, ministers, and seminary students, is sure to inspire. He is exuberant about the Song and optimistic that through it, “the Bible takes the reader from the consequences of primeval rebellion . . . to the unconditional delights of love” (35). Can the Song lead the reader to an experience of heavenly love? Hess suggests that human love indeed holds the potential to approach, and with God’s grace, to encounter the divine.

PrevPreviousMutuality, Mystery, and Marriage: Love in the Song of Songs
Next1 Corinthians 14:33b-38 as a Pauline Quotation-Refutation DeviceNext