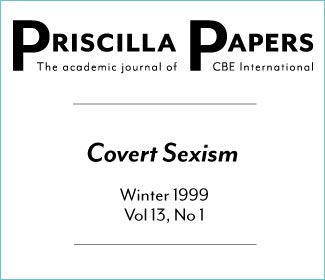 I recently had the dubious honor of being the only female passenger in the first class cabin of a crowded jet. As the plane landed and taxied toward the terminal I, like all the men around me, quickly gathered my belongings and stood in the aisle. Apparently the ground crew was having difficulty opening the door, and after about ten minutes of listening to mechanical parts grind back and forth, one man, standing inches behind me blurted out, “Oh, it’s probably some stupid woman who can’t figure out how to open the door!” The other men chuckled, and I smiled like one of the boys, feeling strangely invisible and deeply humiliated by the entire circumstance. Yet, I couldn’t help but wonder if individuals would be as inclined to vent racist rather than sexist attitudes? Would they be as inclined to admit they thought Asian or African-Ameicans inept, particularly if one were present?

Covert (and perhaps unintentional) sexism is often as invisible to the perpetrators as it is to the victims. For example, I know of a successful Christian bookstore that sells buttons with “funny” slogans on them such as: “I’d quit school but I need the rest” or “I’m a male chauvinist pig.” The first slogan is, perhaps, humorous; the second, in my opinion, is another example of our wide and blind practice of demeaning women. Would that bookstore sell buttons that read “I’m a racist” or “I’m anti-Semitic”? What’s the difference? If racism (the erroneous belief that one race is superior to another, and the exercise of power of one race over another) is a sin, so is sexism. I might even dare to argue that sexism (the erroneous belief that one sex is superior to the other, and the exercise of power of one sex over another) is a particularly heinous sin, when one considers that women are almost always an oppressed people within every oppressed people.

I am frequently reminded of the many parallels that exist among disadvantaged peoples. Recall the rhetoric some used to support slavery in the U.S.: some argued from Scripture (persons of color descended from Ham, the wicked son of Noah [Martin Marty, Pilgrims in Their Own Land, Boston: Little, Brown & Co., 1984, p. 242]); some argued on the basis of anatomy (African-Americans have smaller brains [ibid., p. 256]). Who has not heard similar rhetoric with regard to women? I remember listening to a highly respected Evangelical psychologist tell a radio audience that women have brains which are lateralized to the left, and hence are best suited for non-analytic, non-leadership, social service, and domestic roles. And, of course, one camp of scholarship points to Eve, her failings, and the subsequent (and just) subjugation of her gender.

It seems to me that one of the problems of injustice is that it casts a dense, seemingly impenetrable shadow over the face of God. In an account of Southern slaves in the U.S. we observe the following logic:

“Massa, may I ask you something?”

‘Ask what you please?”

“Can you splain how it happened in fust place, that the white folks got the start of black folks, so as to make dem slaves and do all de work?”

“Uncle Pete, it’s no use talking, It’s fo’ordained. The Bible tells you that the Lord fo’ordained the blacks to work, and the white man to boss”

I am compelled to ask whether the secular feminist movement is a result of women asking whether “God is a fair man”?

Mercifully, the church in certain quarters continues to fight the sins of sexism. Christians within our own Gordon-Conwell community strive to make the problems of sexism visible. Recently, a Gordon-Conwell professor tried to impress on a class that women in many nations around the world are forced to endure oppression and abuse in many forms. For example, women in Moslem countries are often not permitted to immigrate without written permission from the male head of the household, nor are they permitted to drive cars. Following the class one could overhear Gordon-Conwell students (both male and female) laughing at the thought of their female friends denied the right to drive. I could not help but wonder, would we be as inclined to laugh at a situation that deprived any race or ethnic group the right to drive a car?

Please don’t misunderstand me, I’m as guilty as anyone, and the problems women face are only just becoming visible and audible. As our recent Ockenga lecturer Haddon Robinson reminded us, unless we see ourselves as the Levite and Pharisee in the story of the good Samaritan, we haven’t understood the potency of our sinfulness, nor the power of God to use despised and unlikely instruments to save us. Since we are all in need of mercy, let us turn a merciful ear to the cries of women, and work to expose and extinguish the sin of sexism.

Finally, those of us who find ourselves in positions of power should view the influence we wield as an unearned gift, as a privilege and not a prerogative, for we are all ultimately powerless before our Lord. It seems to me that God has called the more powerful to display greater responsibility in serving the less powerful, in faithful submission to the truth, that in Christ there is neither male nor female, Greek nor Jew, slave nor free.