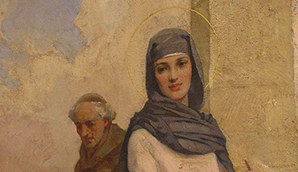 If I asked you to imagine the Middle Ages, what would come to mind?

Most of us think of the Middle Ages as a time of ignorance and violence—the dark middle period between the glories of Rome and the light of the Renaissance. And like every historical era, the Middle Ages has its share of dark moments. But many remarkable people, including remarkable and influential women, lived during this period.

There were some spaces in the medieval Western church where women were free to write theology and have spiritual influence. Women were barred from the priesthood and the great universities that produced scholastic theology. But many women became well-known, admired, and influential in monastic life and through mystic theology.

For women’s history month, here are six medieval women who deserve recognition for their contributions to the church.

When she was a young teenager, Hilda’s great-uncle Edwin, the king of Northumbria (in northern England), married a Kentish princess named Aethelburh. Aethelburh brought with her a Christian monk from Rome named Paulinus, part of a mission to England sent by Pope Gregory the Great. Within a few years, Paulinus succeeded in converting and baptizing Edwin’s entire court—including Hilda.

In her early thirties, Hilda became a nun in a Northumbrian monastery. A decade later, in 657, she became the founding abbess of a double monastery (a community that included both monks and nuns) at Whitby.

Partly because of Hilda’s royal connections and partly because of her growing reputation for wise council, Whitby quickly became an important cultural center in Anglo-Saxon England. In 664, Whitby hosted a council known as the Synod of Whitby at which the Roman and Celtic strands of English Christianity attempted to reconcile their differences.

Hilda was an important figure in the spread of Christianity among the Anglo-Saxons and the establishment of the church in England. Her leadership as a member of the royal family and abbess of a large monastery was widely admired, and several monks from Whitby went on to hold key ecclesiastical offices in the English church. She also nurtured the talent of a cowherd-turned-poet, Caedmon, whose single surviving hymn is our earliest example of Anglo-Saxon poetry.

Hildegard is perhaps best known today as a musician. Many of her liturgical compositions still survive. But Hildegard had a wide range of interests—from music to science to theology. She also traveled throughout Germany preaching and teaching.

Hildegard led a community of nuns while studying and writing about both science and theology. She wrote three volumes of mystical theology. She also wrote scientific texts, including one on her knowledge and practice of medicine.

During her lifetime, Hildegard corresponded with key figures in the church, including popes and the great mystic theologian Bernard of Clairvaux. She was revered as a saint soon after her death, and in 2012, Pope Benedict XVI named Hildegard a Doctor of the Church—an honor bestowed by the Catholic Church on only thirty-six people throughout history.

Marguerite may seem like an odd addition to this list, because she was burned at the stake as a heretic over the material in her book, The Mirror of Simple Souls. However, Marguerite’s life and fate demonstrate how women were limited in the medieval church.

Not much is known of Marguerite’s life, but we do know that she was a Beguine in France. The Beguines were loose communities of women who lived in the monastic spirit but did not take formal vows or place themselves under ecclesiastical authority. The vast majority of Beguines were orthodox, but uneasy with the isolation and wealth of medieval monasteries or unwilling to commit themselves to a lifetime of monasticism. However, the church viewed Beguines with skepticism because they resisted the formal structure and oversight of traditional monasticism.

Marguerite probably wrote The Mirror of Simple Souls around 1300, and within a few years it was declared heretical, largely because Marguerite describes a moment of complete mystical union between the human soul and God. Marguerite was not the only mystic who wrote about the mystical union in this way, but she was the only one burned for her description. The fact that she was a woman who resisted formal ecclesiastical oversight likely played a large role in her execution.

Despite the condemnation of Marguerite and her book, The Mirror of Simple Souls circulated widely in medieval Europe as an anonymous text, suggesting that the problems the church saw lay more with the author than the text itself. It was only in the mid-twentieth century that Marguerite’s name was reunited with her book.

Bridget was a member of the Swedish nobility whose early life, unlike the other women discussed, was very conventional. She married a Swedish nobleman and had several children. She seems to have been quite devout, engaging in acts of charity and taking pilgrimages. But only after her husband’s death in 1344 did her life take a distinctly religious turn.

Soon after the death of her husband, Bridget became a Franciscan tertiary: this meant that she lived in accordance with the ideals of the Franciscans, but she did not take formal monastic vows nor did she live in a convent. During this era, many people like Bridget wanted to live devoutly but were discontented with traditional forms of monastic life, and particularly with the separation between the monastery and the world and with the wealth held by monastic orders. Becoming a tertiary to one of the mendicant orders devoted to an apostolic life of poverty—the Franciscans or the Dominicans—was an attractive alternative for many medieval people.

Bridget was not content to remain a tertiary. In 1350, Bridget moved to Rome in order to petition for the formation of a new double monastic order (including both men and women) committed to poverty. She remained in Rome for the rest of her life, and was known for her charitable work and for urging reforms in the church. In 1370, the pope approved the formation of her proposed order, now known as the Brigittines—an order which still exists today.

From a very young age, Catherine experienced mystical visions and lived a devout life. She did not want to be isolated from the outside world in a monastery. So Catherine chose, like Bridget of Sweden, to become a tertiary—in the Dominican order. She remained in her community and actively served the sick and the poor.

Catherine was involved in the major political conflicts of the era. Most notably, she played a key role in convincing Pope Gregory XI to return the papacy from Avignon (a city controlled by France) to Rome while she worked as an ambassador for the city of Florence in Avignon. The papacy had relocated from Rome to Avignon in 1309 under political pressure from the French kings, a move that deeply concerned many medieval Christians. In 1377, Gregory XI did indeed return to Rome (for a time).

After Gregory XI returned to Rome, Catherine began work on her major text, The Dialogue of Divine Providence. Like most women who wrote theology, she used her mystical visions as a springboard into complex theological meditations on the nature of God. She seems to have learned to write in order to ensure that her words were recorded correctly, showing her dedication to sharing her theology with others. Discouraged, however, by the continued conflict in the church and weakened by years of extreme fasting, Catherine died in 1380 at the age of thirty-three. Like Hildegard, Catherine is a Doctor of the Church.

Julian’s Revelation of Divine Love remains one of the most important mystical texts of the late Middle Ages. Julian was an English anchoress, living a life of extreme monasticism in a small cell attached to a church. At the age of thirty, she experienced a life-threatening illness. While she hovered between life and death, she had a series of visions that she would spend the rest of her life writing about.

Julian’s writing is dense and complex and shows a deep understanding of contemporary theology. In the Revelation, Julian grapples with the gravity of human sin and the miracle of divine love. During her life, Julian was part of a loose network of anchorites, mystics, and spiritual seekers. The depth of her theology reminds us that even when excluded from formal education, medieval women could make substantial contributions to our understanding of God.

During women’s history month, let us remember the ways in which these medieval women contributed to theology, shaped new forms of spirituality, and guided people into a better understanding of God.