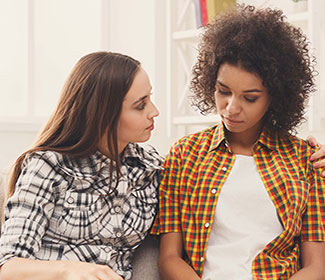 When women come forward about abuse—sexual, religious, emotional, physical, financial, verbal, etc.—reactions often vary widely. Some people cheer on the survivors. Some people question why the victims didn’t come forward earlier. Some people worry that people have been falsely accused.

Two years ago, I posted my own story of sexual and religious abuse on YouTube. Knowing that people often respond defensively, I worried:

In telling my story, who would be impacted and how? What if telling my story caused harm instead of good? I wasn’t concerned about my abusers. But I agonized over how my truth could affect the lives of those close to my abusers, people I still care about. People who had something to lose. What if they were hurt?

Some of you would immediately respond: “Of course not! We shouldn’t silence a victim of abuse to protect the perpetrator’s family.”

But some of you more sensitive types (like me) worry and wrestle with the ethics and human consequences of telling your stories of abuse, especially when they intersect with others’ life stories.

People I’ve loved for decades would inevitably be impacted by what had happened. That was the rub. My first instinct had always been to protect others—especially those close to my heart. Interestingly, that desire to protect is often what entraps us in abusive relationships in the first place. Victims are asked consistently by our abusers (and sometimes even by our own friends and family) to protect, to guard them from the consequences of their actions.

No wonder it’s difficult for us to tell our stories. As women, we’ve been wired to protect those who harm us and stay silent to keep from rocking the boat.

From my work as a therapist, I knew why victims make the choice to tell their stories of abuse (either publicly or privately). It was very clear to me that talking about their experiences was okay and healthy. But that conviction only applied to their stories, not my own! It took me a while to realize that I could claim the same freedom I wanted for my clients.

Before we talk about why it’s always okay to tell our stories, let me first say this: you do not have to tell your story. Some of you are ready and you’re just waiting for a sense of permission or the courage to speak out. Others are nowhere near ready. That’s okay! I wasn’t ready to tell my story publicly for years and years.

The telling of your story to another person or on a public platform is a weighty decision that deserves a lot of consideration. It takes time and only you can make that choice! There should be no pressure—from anyone—to tell your story. And if there is, that person, body, church, organization, or community is wrong to push you to speak before you’re ready and want to. However, I do hope you can eventually tell it to at least one other person—if only for the healing of your own heart.

Here are five reasons why it’s okay for you to tell the truth, no matter who is offended by it.

Your story will almost definitely hurt innocent people who are connected in some way to your abuser, such as spouses, children, or grandchildren. When survivors tell their stories, a lot of people (even besides the abuser) won’t like it.

2. It’s okay to tell your story because it can bring healing and break shame.

Telling our stories of abuse is often a significant part of the trauma healing process. I observe this daily in my office. When we put words to our experiences and tell who we want to tell (even if it’s public), we lay a strong foundation for healing.

None of those things were true. In reclaiming my story, I gained ownership over the narrative. I was able to bring my trauma in line with reality and share it constructively, for my good. And because I was made to tell my distorted abuse narrative publicly—by confessing my “sin” in front of the church—it was important to me to give people the non-distorted version.

Sharing our trauma also breaks the power of shame over both tellers and listeners. Intrinsically, every person who has been abused feels shame. Shame dissipates when the survivor talks about it and their disclosure is then met with belief, acceptance, love, and support. Even the shame of fellow survivors can decrease simply through listening to someone else’s story—because they then know they’re not alone.

For many victims, abuse becomes their norm. We believe that control, shame, and fear are standard in relationships. Likewise, when we tell stories of abuse it can be easy to minimize or normalize our trauma. But abuse isn’t normal. In talking about it out loud and seeing others react with appropriate shock and horror, we can hear that it’s wrong and abnormal, dark and crazy.

3. It’s okay to tell your story because it shines a light into dark places, creates healthier communities, and empowers others to break the silence.

There’s an enforced silence surrounding abuse which not only harms our communities but is also an additional abuse of victims. In pressuring victims to stay silent, or to tell the story in a certain way or at a certain time, we re-traumatize them and add to their shame and pain. When someone is abused, their power to speak is taken away by an abuser. So if survivors themselves are not allowed to determine when and how they tell their stories, we once again empower the perpetrator and disempower the victim. And, we breed toxicity and deception in our churches and communities, which hurts everyone.

Breaking the silence is a threat to the status quo and it’s also a threat to abusers. Victims of abuse are often threatened with horrible things if they talk about what’s happening to them. Exposing the truth is a declaration of freedom and empowerment for survivors, and both are essential steps toward healing.

When you expose abuse, it loses its power over you. Secrets and shame are powerful. When they’re uncovered, they lose their authority. The beauty of a publicly-told story is that secrecy and shame are immediately weakened, and not just personally, but also communally! #ChurchToo and the exposure of rampant sexual abuse in the evangelical church made it clear that evangelicals are due for a season of truth-telling. We will all be better for it.

In naming our trauma, we also undermine the isolation victims often feel. Isolation is a potent catalyst for pain, self-destruction, and even death. Yet, connection with other human beings is an even more potent catalyst for health, personal growth, and life. When we tell our stories, we feel less alone, crazy, and confused and more grounded, sane, and aware.

It’s profoundly validating for survivors to hear another person’s story and find their own story reflected in it. Sometimes, it gives us the extra shot of courage we need to start our own journey of speaking and healing and bringing dark to light.

4. It’s okay to tell your story to bring awareness that abuse is a serious problem in our churches and society, and to promote understanding of the different types of abuse.

When we refuse to see the abuse epidemic in our society, we enable abusers and bolster abusive systems. In telling the truth about what we’re facing, we refuse to allow people and communities to live in denial. Abuse flourishes when people, families, workplaces, and religious institutions minimize abuse and make excuses instead of changes.

When we don’t speak up, it becomes easier for others to deny that there’s a problem. When we do, we force people to confront hard truths. Oppression is undermined when we clearly name abuse, expose oppressors, and take action. Change begins with acknowledgment.

In sharing our unique experiences, we bring greater awareness of the many different forms of abuse (physical, emotional, sexual, spiritual, etc.). Some kinds of abuse are punishable by law (sexual assault of a minor, physical assault, etc.), but abuse can also be subtle and even socially accepted (religious abuse, sexual advances at work, etc.). Sharing our unique experiences can help others identify their abuse. Some victims don’t even know they’re being abused. For example, some people don’t know that being patted on the bottom by a boss is sexual assault. It helps when someone else names that violation as abuse.

It’s always our choice as to how much we want to share and whether or not we want to include concrete details when we talk about abuse. We should only ever share the parts of our experience that we want to share. Describing our abuse in detail in safe spaces can 1) be freeing 2) help expose the severity of the problem and 3) aid other victims.

5. It’s okay to tell your story to create safer communities.

Your story could help others find protection from a current, active abuser. If your abuser has gone on to hurt others, exposing him might help someone else identify and escape abuse. In sharing what happened to us (only when we feel safe and emotionally ready), we can help ensure that other women and girls are safe too, and that, when abuse does tragically happen, victims are heard and believed. We can help prepare our communities to respond better in the future.

Now, I want to be extremely clear here. A survivor’s safety and mental health always come first. No one is obligated to name an abuser publicly, and we are not responsible for the behaviors and past, present, or future crimes of perpetrators. They alone are culpable. But many survivors go on to become advocates, sharing their stories to raise awareness and create safer communities. I am thankful for their courageous efforts.

Connie Baker has written a book on this topic titled: Traumatized by Religious Abuse: Courage, Hope and Healing for Survivors.

Synopsis: Traumatized by Religious Abuse: Courage, Hope and Healing for Survivors is for all who have experienced control and abuse at the hands of those religious leaders and institutions who represent God. Traumatic wounds suffered in a place that should represent safety, security, and comfort can be some of the most confusing wounds of all.  Psychotherapist Connie Baker knows better than most what it’s like to suffer—and survive—religious abuse. With authenticity, openness, and careful consideration of many different faith traditions, she provides a path to hope and healing.

PrevPreviousPriscilla: The Life of an Early Christian
NextMy Pastor Was A Woman and It Meant Everything to MeNext