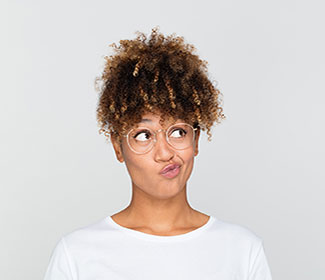 Many Christians believe that strict gender roles—men lead and women submit—are God-ordained. They attempt to find support for this claim in Genesis, pointing to “creation order.” Some argue that because God made Adam before Eve, Adam occupies a special position and wields authority over her.

Historically, many have suggested that Eve’s creation from a “rib” makes her Adam’s inferior. You may hear the term “helpmate” to describe Eve’s supposedly submissive orientation toward Adam. Some in Christian history have extrapolated from “creation order” that women do not bear the image of God. It’s rare today to claim this belief outright, but it persists in the idea that Eve was created for Adam—and therefore, that all women exist for the purposes of men.

But when we look at the creation stories in Genesis, we see an emphasis not on Adam and Eve’s difference, but on their sameness (“bone of my bone and flesh of my flesh”). Though Eve (and women with her) has been reduced to a servant in need of constant male guidance, the Hebrew indicates that she’s the only being in God’s creation that could match Adam as an equal. Eve is not Adam’s inferior; she’s his perfect partner.

Further, if we read Genesis 2–3 as a whole, it’s hard to argue that order implies authority. Ultimately, this creation story doesn’t say that women are submissive helpers or that Adam has special authority over Eve. Here’s why:

What does Adam mean?

Historically, some have argued that Adam was created in the image of God in a way that Eve wasn’t. This is due to a misunderstanding of the word ‘adam. In Hebrew, ’adam is a noun. It’s related to the word ’adamah, which means “dirt” or “earth.” We have this in English, too. Our word, “human,” is related to “humus,” an archaic term for soil. Just like “human,” ’adam is gender-neutral. It can mean something like “earthling.”

In Genesis 1 (which many scholars believe was written by a different author from Genesis 2–3), ’adam is not an individual, but rather, humanity as a whole.

Genesis 1:27 says, “God created ’adam in his own image; in the image of God he created him, male and female he created them.” It’s usually translated, “God created man or Adam in his own image.” That may sound like only men were created in God’s image. In reality, ’adam here just means “human.” In Genesis 1:26, God says, “Let us make ’adam in our own image, in our likeness, so that they may rule.” This is never translated “Adam,” but always “mankind” or, much better, “human beings.” This is because it’s clear that God is talking about many people.

In Genesis 2–3, Adam is also used as a proper name, though the double meaning is purposefully fuzzy to show us many true things about humanity. 3:20 says, “Adam named his wife Eve.” In this case, it’s clear that ’adam and chavvah (the Hebrew form of Eve, which means “living”) are proper names. However, we can also appreciate the rich, poetic idea that the stuff of the earth and the force of life have come together to produce humanity.

While there’s a person named Adam, Genesis also uses ’adam to talk about a big-picture concept of humanity. This use of the word illustrates that all human beings are one, and equally created in the image of God.

What about the rib?

Adam came from dirt, so it would be odd if coming from a rib made Eve inferior to him. In fact, since the humans are supposed to rule the earth, it might imply the opposite! Instead of thinking about order here, though, it’s more productive to think about identity. Eve comes from Adam, so she’s like him in every way—“bone of my bone and flesh of my flesh.” None of the other creatures in the garden were Adam’s equal—she had to be like him to be a “suitable helper.”

The word tsela, which has been mistranslated “rib” for many centuries, really means “side” or “leaf.” This is the only time in the Old Testament that it’s translated “rib,” and this is because of speculation and tales from the ancient rabbis.1

Picture a pair of swinging saloon doors. Each swinging panel is a tsela. As we’ll see below, the term “helpmeet” suggests the same: man and woman are two sides of one thing. They’re mirror images, if you will—and both are necessary to make up the whole. God took enough of the original human to make another creature (Eve) that was like him. In the New Testament, this is important for understanding the Pauline concept of “headship.” Eve was created out of Adam so that they can be the same: equally made in the image of God, identical in purpose (ruling the earth), and mutual in relationship.

The word “helpmate” is a common distortion of a phrase in the King James Version—“a help meet for him.” “Meet” is an archaic adjective that means “fitting.” You may have encountered this in an old translation of the Great Prayer of Thanksgiving, used in many traditions as a communion prayer: it is “meet and right” that we give our thanks and praise to God. “A help [that is] meet for him” is a fair but misunderstood translation of the Hebrew phrase ‘ezer kenegdo.

‘Ezer means “a help,” usually in the sense of “rescue” or “succor.” Outside of Genesis 2, ‘ezer is used nineteen times in the Bible. Sixteen times, it’s talking about God. At least one other instance refers to a rescuing army. Clearly, ‘ezer does not mean “assistant.” It means an equal—or stronger—force that comes to one’s aid.

Kenegdo is several words pushed together. Ke means “like.” Neged means “across from.” O is a suffix that means “him.” So kenegdo means, “like and across from him” or “like and facing him.”

So a “help” who “meets” the other person is acceptable, but the full sense of the phrase is “an equal and opposite partner to come to his aid.” This means that Eve isn’t subordinate to Adam. It also means that the emphasis is on the couple’s likeness, not their difference. This is even clearer since it comes just after Adam searches among the animals for an ‘ezer kenegdo (v. 18 and 20)! Nothing but mutual identity will do.

Doesn’t Adam have authority because he came first?

In fact, 1 Corinthians 11 may imply that Eve has an even greater glory, being the last piece of creation and the one who completes humanity. The creation of Eve shows us that for the material of the earth (’adamah) to produce much of anything, it needs to be coupled with life (chavvah). It also shows that contrary to what patriarchal culture would have us believe, women are a crucial part of the whole human endeavor—not just filling the earth, but ruling it too (Genesis 1:28).

So what should you say if someone says women were created to be men’s helpmeets?

PrevPreviousJacob, Esau, and What It Means to Be a “Good Man”
NextSmart Women and Fragile Men: How Patriarchy Shapes Identity and RomanceNext