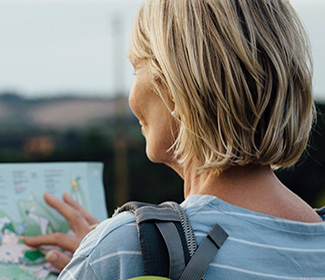 Welcome to the Jungle: The Dating Adventures of a Fifty-Something Egalitarian

After surviving a tumultuous divorce, I found myself in my fifties, newly single and surveying an unknown dating landscape. After embracing an egalitarian viewpoint in the 80s when I attended a church pastored by Bishop LaDonna Osborne, I knew I was looking for an equal partner. The mission—if I chose to accept it—was to find a man who shared my belief in co-leadership and mutual submission.

I soon learned that finding an egalitarian man is a daunting task.

I was also out of practice at dating, having been married for twenty plus years. I read a number of books on everything from how to catch the right guy, to how often to text, to who should chase whom, to safety issues when online dating, to topics to discuss or avoid on dates. Eventually I decided that I could sit at home in my hut and read books, or I could swing headfirst into the dating jungle. In the four years since, I have walked a mile in many different shoes: high heels for dinner downtown, hiking boots for the Appalachian Trail, water shoes for kayaking the Potomac, athletic shoes for biking the Chesapeake and Ohio Canal, sandals for antiquing, and flip flops for the local swimming pool. Along the way, I have at times felt ambiguous—not even certain I want to find another partner. Yet, the alternative of being alone for the rest of my life does not seem inviting either.

I faithfully go to church but feel out of place sometimes. Don’t get me wrong. People are kind and sympathetic toward my uninvited singleness. Still, church culture generally leans toward married couples. Attendance can amplify my loneliness, especially when I watch couples leave for lunch together afterwards. It is a painful reminder that I’m no longer part of a twosome. Those who have experienced a divorce themselves are the most sympathetic, frequently inviting me to dinner on holidays when I can’t get home to family.

As for potential dates at church, there’s only a small pool of fellows available. I’ve also observed that some men in my age range seem to be looking for a woman ten or more years younger. Oddly, I’m dubbed—by some—too old to date a man I might have attended kindergarten with. The analytical and cynical part of my brain wonders if part of the reason some men seek younger spouses is so they can sling them in the face of the wives they mistreated and then discarded—after those wives have paid the physical price of birthing and raising men’s children. And, older women who date are often judged harshly for their appearance (wrinkles, grey hair, etc.) and pressured to compete with younger women. Studies show that in the world of online dating, women peak at eighteen years old whereas men peak at fifty.1 Not all men are like this, of course, but old wounds sometimes overwhelm a positive dating outlook.

As it turns out, trying to meet “the one” during the course of everyday life is an old-fashioned idea, from the B.C. (Before Cellular) era. It took a year for me to work up the courage to try online dating. A friend, more technically savvy than I, helped create my profile on a Christian dating site. There were things to learn—like how to screen out one-picture scammers, people who chat with hundreds of women daily and make romantic gestures and promises while hoping for the chance to steal their money. After learning the ropes, I have relaxed a bit and started to initiate more chats.

This is a welcome relief to *Brad (name changed), who admits that he is tired of doing all the chasing and dealing with rejection. “It is nice when a woman takes the risk,” he tells me. Consequently, making the first move means I have to face the possibility of rejection head on. This hurts more or less, depending on how much time or emotion I have invested in sending a message. The rebuff is typically communicated by either no response at all (ghosting) or via text. “I don’t think we are a match,” Brad says. I swipe onward.

When a connection is made online, we typically text, talk on the phone, and then schedule a date. The first meeting reminds me of a job interview. The worst—and most uncertain—moment is when the check is brought to the table. This is where equality meets chivalry. My date with *Dave comes to mind.

Clearing away our plates, the waiter sets the check presentation folder down; we both take a look. I offer to pay my half, but Dave insists on paying it all, since he asked me out. Seeing him clutching the check close to his purple button-down shirt, I pause—not wanting to make a scene—and then concede. But on my next date with Dave I say, “Hey you paid last time. I will pick up the tab this time. After all, I work just like you do.” He argues a bit, but graciously accepts.

Then Dave leans towards me and in a whisper says that no woman has ever offered to buy him dinner. “It’s refreshing,” he sighs.

“It seems only fair,” I respond with a reassuring smile. And all is well with the world until suddenly, in the back of my head, the voices of my parents whisper: “A gentleman always pays. What if he takes you to the cleaners? What kind of man is he?”

“It was just dinner,” I answer, trying to push away their imaginary scowls. In these moments, my old-fashioned upbringing collides uncomfortably with my egalitarian views. I wonder if I am dating the right way, if perhaps I should budge on my egalitarian values, just a bit. I ultimately do not.

Frequently, I ask the men I date about why they mark “Christian” under “religion” in their dating profiles. This question is often met with answers like “Huh, what? Oh that. My parents went to church,” or shocked looks and then, “I went to church when I was a kid. You mean you still go?” I nod and say, “Yes, quite often.”

They are momentarily speechless but then they ask: “So you are religious?”

“No, I have a relationship with Jesus. It’s not a set of religious rules.”

They usually look even more bewildered. I try to explain a bit more, then decide to change the subject. Some dates are totally on board with the equality piece, but they aren’t interested in sharing faith. I want both.

I have dated other guys who, though they seem truly dedicated to the Lord, are convinced that “God made man to be the ‘head,’ and women to submit.” My attempts at theological conversation about the duty of all Christians to submit to God and one another, a collaborative strength-based approach to marriage, or the much-debated Greek meaning of the word “head” are typically met with stunned, confused looks. When I gently indicate that no, the marital guidelines in Ephesians don’t start with verse 22 and flip out my Bible app to explain the connection between verses 21 and 22—it has typically been the first and last date.

Thomas, a Christian man whose wife passed away, informs me that his faith gets in the way of dating. I can guess what is coming, but I ask why anyway. He states that his church doctrine only permits him to marry someone if they are: 1. single-never married 2. widowed 3. divorced because their spouse cheated.

I inquire: “If a woman is single but has been sexually intimate with five live-in partners without a legal paper trail, would she still fall under your category of single-never married? What if a woman is widowed but killed her husband? Does that count? And does the woman need to prove that her husband cheated before you will accept a date?” He responds, “I never thought about it that way.” I laugh, shake my head and say: “Welcome to the jungle.”

I press him, sensing what is coming: “What if a woman is married to a Christian man who is emotionally abusive? What if she prays, reads, self-reflects, works toward personal growth, and seeks counsel, and still nothing changes? What if she can’t meet his impossible standards? What if one morning, after a night of listening to his raging threats to divorce her, God whispers to the woman: ‘It’s time to let go.’ And so she does, reluctantly.“

The woman is me.

Thomas recounts how as a young boy he lay terrified in his bed on several occasions, listening to his father verbally and physically batter his mother. During one incident, he was present when his father threw his mother across the kitchen. She crashed into a cabinet, screaming and crying. He says, “It was awful and to this day it breaks my heart to hear a woman cry.”

I ask if, after witnessing his own mother be victimized, he would ever consider marrying a woman who had left an abusive situation. He pauses, then answers: “No, I don’t think I could.”  I look at him intently for a moment. “Clearly, I do not meet with your criteria for a long-term relationship. It was nice to meet you, and good luck with your search,” I reply. Then, I smile, hug this Christian brother goodbye, and walk off into the sunset after yet another disappointing interview. I mean, date.

Being single in your fifties when you have been and want to be married is not easy. Dating after a divorce is not easy. Finding an egalitarian man is not easy. It is a long road with many bumps and hurdles along the way. But it is crucial that we women who don’t fit into the church’s too-neat “happily ever after” narrative share our stories. Because God sees our struggles and the church should too.