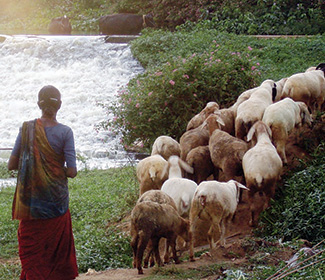 The Way of a Shepherd

He tends his flock like a shepherd: he gathers the lambs in his arms and carries them close to his heart; he gently leads those that have young. (Isa. 40:11)

In Bible times many women shepherded flocks. We first meet Rachel as a shepherd: “Rachel came with her father’s sheep for she was their shepherd” (Gen. 29:6, 9). We are also introduced to Zipporah as a shepherd: “Now a priest of Midian had seven daughters and they came to draw water and fill the troughs to water their father’s flock” (Exod. 2:16).

These matriarchs of Israel both met their husbands at wells where they led their flocks to drink. During the course of their daily work, the contact occurred that led to their marriages and many more years of caring for flocks.

By the time I was eight or nine years old, my family knew I was the one who looked after the lambs.

In lambing season from late July through August (which is late winter in New Zealand), my father used to catch his tall brown hack and “ride around the sheep” as he called it. In each fenced paddock he checked the lambing ewes and helped some that were having difficulty.

He found some “cast” upside down on the grass with their feet up, unable to right themselves because of the weight of their wet fleece and the unborn lamb. They only needed a push and they could run off.

He found lost lambs, neglected lambs, sick lambs, triplets that needed one taken away as they were too much for the mother, and sometimes a live lamb standing beside a dead ewe. Up into a gunny sack on the horse went the unfortunate waif. And that was where my task began when Dad arrived back at the house with two or three skinny, short-wooled, hungry, or sick little creatures.

They required a clean gunny sack and a place on the hearth close to the heat of the iron stove in the kitchen—warmth and protection first, then food. I warmed some cow’s milk on the stove, poured it in a bottle, jammed on the rubber teat, and tried to make the little orphan drink. Some quickly learnt to suck. Some needed hourly coaxing.

When they revived a little, they stayed in an upturned box in the kitchen and I fed them milk three times a day. By the time they were three or four weeks, they could start to nibble the grass in the nearest paddock. They raced to me when I called with yet another bottle of the milk they now bunted and shoved for twice a day.

I guess I can still learn from those days on the family farm in my “shepherd-of-humans” tasks. Little ones need total care, starting with protection, warmth, drink, and then graded food. They start dependent, but it must never be my role to keep them dependent on me. My goal was to provide all the nurture they needed, while increasing their independence until they could feed and fend for themselves. Worth thinking about, that.

Let us as parents teach our children wise decision-making as soon as they are ready. They can never flourish if they have to hear a voice outside them telling them what to do. They need the internal voice of their own wisdom to make good decisions.

In addition to mistaken parents, I fear there are also shepherds of God’s flock who ignore this principle. Counsellors, cell group leaders, or pastors may keep people depending on their leadership by keeping the tasks for themselves. They gain their own sense of worth from being the shepherd and would feel lost without it. This is not right. Our job is to increase the freedom, effectiveness, self-worth, and self-management of all with whom we come in contact. In every context, we are empowering others to grow and do the same task we had.

Secure in the Shepherd

What about the shepherds I see in India? Some days they are an old woman and an old man, another day a couple of men, or a woman and a teen-age girl who wander up the road with a staff and battered, black umbrella for shelter from the sun or the rain. They may chivvy along a straggle of six black cows, 25 brown and white goats, and 30 droopy-eared sheep.

I saw something remarkable when I walked through Kailasana village one morning. The sun was well risen, crows circled, myna birds mewed, roosters crowed and dogs sought edible scraps. A man crouched by a cow and squirted milk into a saucepan, girls carried plastic pots of water, women bent over open fires, and boys learnt their schoolwork. All were up and about, starting the day’s chores—except the sheep. They sat asleep in their pens.

“Why aren’t the sheep getting ready for the day?” I asked myself.

I made a guess. The sheep knew their shepherd would come for them later in the morning. Until then, they need not worry or hurry. They could sit confidently. Their shepherd would care for them. I thought there was a lesson for us there, too. Do we wait secure in our Shepherd?

I think about the mutuality of the shepherd task in rural villages just like those in Palestine when Jesus walked among sheep and their shepherds. Men, women, girls, and boys—whoever is best suited—does the task. That is appealing.

Jesus, Peter, and the writer to the Hebrews gained their metaphors from that scene. “Be shepherds of God’s flock that is under your care, watching over them—not because you must, but because you are willing, as God wants you to be; not pursuing dishonest gain, but eager to serve; not lording it over those entrusted to you, but being an example to the flock” (1 Pet. 5:2, 3).

If we aim to do this, we can receive all the necessary skills. “Now may the God of peace, who through the blood of the eternal covenant brought back from the dead our Lord Jesus, that great Shepherd of the sheep, equip you with everything good for doing his will” (Heb. 13:20, 21).

I look back to my days as a young shepherd on our family farm in New Zealand and think of scenes where I live now in India, where I can walk morning or evening among the shepherds outside the bustling city of Bangalore. These images invite reflection on who we should be as shepherds of children and adults in our work for God. What messages do our “flocks” pick up from us?

My own flock is varied as I am a mother and grandmother, writer, and lecturer in a theological college. Even though my daughters are grown, one never ceases to encourage, talk, write emails, make phone calls, pray. They nurture me as well. Their children too need to know I am there for them.

Is a writer a shepherd? Other people’s writings have at times given me backbone and courage, helped me square my shoulders and face a needed theology, or led me to new nourishment in growing closer to God. I want my writing to do that too.

As a lecturer, what may my students—future shepherds themselves— learn from me? I hope some learn honesty and clarity in academic writing, the importance of family life, and the value of stories in communication. Perhaps here in India when traditional men and women find themselves in my flock they will respond, “A woman teaching men and women! Hmmm! It can be done.”

What messages do your “flocks” receive from you?