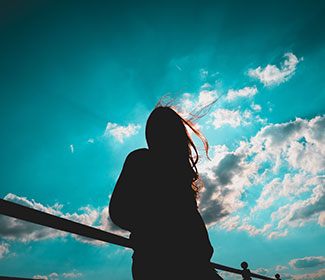 The Power of a Pronoun: How What We Call God Affects Everything

Editor’s Note: This is one of the 2019 Top 15 CBE Writing Contest winners. Enjoy!

Standing in an old church with a red prayer book in my hands, the voices of the small number of worshippers seemed to magically fill the high, vaulted ceilings. I had recently moved and was visiting Episcopal churches searching for a good fit. Each week, I crossed my forehead, lips, and heart as the priest read the gospel in the middle of the sanctuary. Each week, I took communion with strangers who I recognized as spiritual siblings. And each week, we recited the Nicene Creed.

I felt all the breath go out of my lungs and tears brim in my eyes. Only once before had I publicly heard the Christian God being referred to with a feminine pronoun. Then, just as it was that gray Sunday morning, the experience was powerful.

I was fortunate enough to grow up in a church that affirmed women. I saw women preach (albeit not regularly), we supported female missionaries, and my youth pastor saw and cultivated the gift of ministry and preaching within me. I was surrounded by strong, Christian women—outspoken, well-versed, and loving. And when they couldn’t find a man to play Ebenezer Scrooge in our church’s rendition of A Christmas Carol, they changed the main character to Eleanor. I don’t carry the baggage that comes from being raised in a completely complementarian context. Marriage wasn’t the supreme goal for my life. I was never instructed to submit to a man. A ceiling was never set for me.

Yet, even in this environment, God was always male. The church didn’t use gender inclusive translations of the Bible. I never heard sermons about Ruth, Deborah, or Hannah. Whenever “men” appeared in a Bible verse, it was always followed by the comment, “You know, that means all people, both men and women.”

But continually referring to God as “he,” though admitting God has no gender, slowly etches patriarchy on our souls. Without realizing it, I began to internalize the idea that God was male. Therefore, God related more to men. When God spoke, he spoke to men. He must also think men are more important.

With a realized and confirmed sense that I should go into ministry, I enrolled in a Christian college to earn a ministry and missions degree. Even though the college was located in an incredibly conservative town, we were referred to as first-years instead of freshmen, and gender inclusive Bibles were on all our textbook lists. When I asked friends on campus who they recommended for Intro to Theology, I heard that one of the professors was hard, another would get you thinking, but above all, avoid the one that sometimes referred to God as “she.” Although I grew up egalitarian, I had an ingrained, unbiblical belief that referring to God as anything other than “he” was heretical.

However, the only class that fit my schedule was the one I was told to avoid at all costs, so off I went to learn theology from the professor that called God “she.” “I can always transfer to somewhere more ‘Bible-believing’ after this year,” I thought to myself.

This professor introduced me to new theologies and perspectives. They walked with me as I wrestled with being a woman in ministry, and they continued to be an encouragement. Although I never heard God referred to as “she” in that class, it started me down a path of discovering new things about God. I learned that God refers to Godself in both traditionally feminine and masculine ways, that Jesus treated women extraordinarily better than his context dictated, and that our God is uniquely relational.

After college, I spent five years serving Muslim refugees, as well as talking and writing about the Bible and immigration. With literary guides such as Kate McCord, Phyllis Trible, Chris Hoke, Soong-Chan Rah, Leroy Barber and more, I found a new world in the Bible, one where a caring and powerful God looks after refugees, rape survivors, and others who are oppressed. I read how faithful God was to the Israelites when they fled Pharaoh to become refugees in the desert, and how Jesus survived Herod’s great infanticide when his family sought refuge in Egypt. I told my Muslim friends about a God who could relate to them, one who understood what it was like to leave everything familiar and try to make it in a new country. I used my platform as a missionary to speak to my supporters about welcoming refugees and immigrants. I shared how much my faith had changed and grown because of my relationships with those from other countries.

Despite my growing understanding of God’s compassion for the refugee and stranger, I continued to wrestle with my understanding of what pronoun to use for God. Using no pronoun felt impersonal and using only “he” felt exclusionary. Even with all the scriptural evidence showing that God could relate to a refugee, could God really understand a female refugee, or a woman in general? Did God know how we think, feel, or what we need?

I was brought back to what I had learned in college: God is described using both masculine and feminine imagery. It is usually at this point in the argument where people assert that God can be called “she” because God is portrayed as nurturing throughout the Bible. However, this reasoning distills Scripture’s use of masculine and feminine imagery down to gender roles—men are powerful, and women are nurturing. These are the same gender roles so many of us rail against, the boxes we don’t find ourselves fitting in. Why would we then use these same traditional roles to argue that God can be called “she”?

Instead of using gender roles, what if we acknowledged that our language is finite and that any word or pronoun we use to describe God will always fall short of who God is. As Meghan Murphy-Gill writes in U.S. Catholic,

The descriptions of God we have in the Bible don’t limit God to a masculine pronoun, but rather they offer a piece of the puzzle to who God is.

Murphy-Gill further writes, “Even if we say God is neither male nor female, to call God ‘him’ guides our internal reasoning. And if God is male, then male is better than female.” Something as simple as a pronoun, when heard over and over, tells girls and women that they are second-rate and that the God we tout as being relational cannot fully understand or relate to them. It creates a barrier to women’s full inclusion in the church and discredits the other ways we affirm women if we still insist that God, who has no gender, must be referred to with the masculine pronoun.

I began using “she” for God in my private prayers and journals. At times, I called her “mother.” Using the feminine pronoun for God helped me to feel seen, valued, and affirmed in a way that I hadn’t experienced yet as a woman in ministry. This was important since I had recently taken a leadership position within my Christian organization where most of my colleagues were men. Dismantling the belief that God is male allowed me to feel connected to God as a woman, in the way that I so often preached to others.

This was where I was mentally when I stood in that Episcopal church and heard the congregation, led by a woman, refer to the Holy Spirit as “she” (an experience that still brings tears to my eyes). My secret indulgence was now being displayed on a wide scale. My inner wonderings of what to call God were affirmed in a church setting. If God doesn’t have gender, then it isn’t necessary to always call God “he.”

When Moses asks for God’s name, God simply replies, “I am who I am” (Exodus 3:13-14). I am who I am. I am all the descriptions you have read about me in the Bible. I am all-knowing and rule over the world, yet I know each person intimately and personally. I created the spacious skies and the miniscule mitochondria. I am not male, and I am not female. I am who I am.

PrevPreviousWhat’s a Man to Do?
NextThe Imprisonment of Spiritual AbuseNext