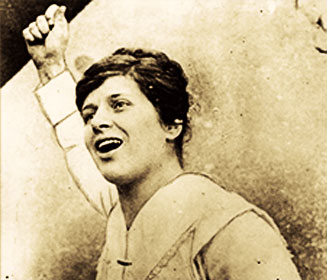 In the Name of the Gospel

The Holiness and Pentecostal movements that erupted after the Civil War gave women new opportunities to preach the gospel with a freedom that was unprecedented in American religious history. Two experiences well-known to the Holiness and Pentecostal movements— sanctification and Holy Spirit baptism — were understood to empower women, as well as men, without regard to ethnicity or class; to gift them as the Spirit willed; and to release them to be fully engaged in the work of the Lord. These movements generally provided gifted women more freedom to minister than their sisters in other denominations, giving them places as equal partners in preaching the gospel on the camp meeting and revival circuits, and as founders of flourishing congregations and denominations of every ilk and size.

Lay preacher Amanda Berry Smith addressed white camp meeting congregations as often as those within her own black community. In the late 1800s, Smith traveled to England where she befriended Hannah Whitehall Smith and Mary Broadman, which led to invitations to preach throughout the United Kingdom as the first black woman international evangelist. Following this, she spent two years in India, working with churches and holding meetings in large cities and small villages. She then spent almost eight years (1881–1889) helping with churches, establishing temperance societies, and working to improve the status of women and education for children in Liberia and Sierra Leone. Smith’s ministry in those countries was so prolific that, at its end, famed Methodist missionary William Taylor insisted that she “had done more for the cause of missions and temperance in Africa than the combined efforts of all missionaries before her.”

Faith healer Maria Woodworth Etter began preaching in 1880 and was among the most famous Holiness camp meeting revivalists of her time. When she was nearly seventy years old, she held her largest revivals, drawing over twenty-five thousand people on multiple occasions. Her worship services were noted for supernatural manifestations like healings, exorcisms, miracles, glossolalia (speaking in tongues), trances, visions, and people being “slain in the Spirit.” Etter was also a prolific church planter who, throughout her ministry, founded numerous new congregations by preaching a series of meetings to a community, organizing the converts, and placing someone in charge. By the end of a single one and one-half-year period, she had preached nine revivals and organized two congregations — one with more than seventy members.

In 1918, while still traveling and evangelizing, Etter founded the only church she would pastor, the Woodworth-Etter Tabernacle in Indianapolis. The biblical feminist regularly defended women’s right to preach and encouraged them to go into the ministry. She called on women to, “let their lights shine, to bring out their talents that have been hidden away rusting, and use them for the glory of God.”

Another woman who emerged during this period was Carrie Judd Montgomery, whose more than sixty years of ministry — from 1880 to 1946 — bridged both the Holiness and the Pentecostal movements. After being miraculously healed from a debilitating spinal illness, her testimony caught the attention of a community in Buffalo, New York, where she then developed a ministry of writing and speaking on divine healing. Around 1880, at age twenty-two, she wrote The Prayer of Faith, which was translated into four languages. A year later, she began publishing Triumphs of Faith: A Monthly Journal for the Promotion of Healing and Holiness, which she continued to publish for sixty-six years, until her death. After moving to California and marrying well-to-do businessman George Montgomery, who supported her ministry financially, she established the House of Peace to provide respite for missionaries from more than one hundred mission boards. Within the house, she served as pastor for the weekly worship services of Beulah Chapel. She also founded Shalom Training School for Missionaries, a children’s home for orphans, and an annual camp meeting at Cazadera, California.

Montgomery associated with many prominent Holiness leaders, including hymnist William Broadman; A. B. Simpson of the Christian and Missionary Alliance (of which she was an active member); and William and Catherine Booth, founders of the Salvation Army. Once she received the baptism of the Holy Spirit, she never broke fellowship with her colleagues, but continued her steady preaching schedule — now adding the Pentecostal theology to her message. In 1909, she and her husband embarked on a missionary trip around the world, conducting revival meetings in Japan, China, India, and England. Montgomery was also a charter member of the General Council of the Assemblies of God.

During the 1920s, Canadian-born Aimee Semple McPherson was widely recognized as one of the most gifted evangelists in the United States. McPherson’s dramatic flair and ability to attract people from all walks of life assured that she made the front page of the nation’s most prominent newspapers at least three times a week on average. Her legacy includes building the 5,300 seat Angelus Temple, one of the first megachurches in the nation; founding the International Church of the Foursquare Gospel (which today, with more than one million members, is perhaps the largest and most influential Protestant denomination established by a woman); becoming the first woman to broadcast a sermon on the radio and receive a license from the Federal Communications Commission to operate a radio station; and establishing LIFE Bible College, one of the earliest Pentecostal institutions of higher education.

Faith healer Kathryn Kuhlman began her ministry by working in the tent revivals of her sister and brother-in-law before beginning itinerant preaching throughout Idaho. Once she was given the opportunity to preach, her ministry quickly exploded on the scene of American popular religion. Kuhlman founded the Denver Revival Tabernacle in 1935. Her radio broadcast, “Smiling Through,” was carried on the CBS network and was heard on more than fifty stations across the country in the 1940s and 1950s. In the 1960s and 1970s, her weekly television program, “I Believe in Miracles,” aired nationally, reaching millions — decades before the term televangelist became commonplace. Though she had come to faith in the United Methodist Church, Kuhlman’s ministry was non-denominational and attracted people from a variety of Christian traditions. During the thirty years of her prominence, she was as controversial as she was popular, incurring criticism from both the medical and church communities. Yet she continued filling auditoriums throughout the country with devoted followers who repeatedly confirmed the authenticity of the healings they experienced in her services.

Other lesser-known but still extraordinary women arose from every sector of society to aggressively assert their God-given call to preach the gospel and challenge existing understandings of women’s place in the church. Florence Crawford worked closely with Pentecostal leader William Seymour at the famous Azusa Street Revival and was appointed by him to oversee and direct the many new Pentecostal mission churches that were forming along the West Coast. Later, she left Los Angeles to form the Apostolic Faith Mission, a denomination which today has more foreign than domestic congregations. Ida Robinson founded the Mt. Sinai Holy Church specifically as a place for women to be free to serve at all levels of institutional leadership. For the first seventy-five years of its existence, the denomination was led by women presiding as bishops. In the early twentieth century, Pandita Ramabai led an explosive revival in Mukti Mission in Puni, India, which rivaled what was unfolding at Azusa Street. Ramabai, a poet and scholar as well as religious leader, championed reforms for women and children among India’s poor and used her position as a high caste woman to leverage reform for women within her society. The impact of her work on behalf of women was so great that in 1989, the Indian government issued a commemorative postage stamp in her honor.

Each of these women left an indelible imprint on the shape of evangelical Christianity and a legacy that cannot be overlooked by those with a serious interest in the history of the Holiness or Pentecostal movements. Unfortunately, as these movements— which were once denigrated as a haven for the poor and disinherited— have attempted to gain more respect and move into the mainstream, they have compromised or sacrificed their openness to the ministry and leadership of women. Yet the undeniable impact of women’s labor in the name of the gospel is attested to, in part, by the fact that many of the men who would later go on to be the leaders of Holiness and Pentecostal congregations and denominations came to faith through these women’s ministries, or through the ministries of many others like them. In some cases, these very men would later deny other women a viable place in ministry.

Though limitations on women in institutional leadership continue, Holiness and Pentecostal women continue to carry out evangelistic ministries using the venues of revival and camp meetings as well as women’s conferences and conventions. In these arenas they are able both to speak the gospel of empowerment into the lives of their Christian sisters and provide a pattern for other women to engage in viable ministry all while challenging stereotypes regarding a women’s place in the church. May we learn from and model their boldness, persistence, and strong faith.