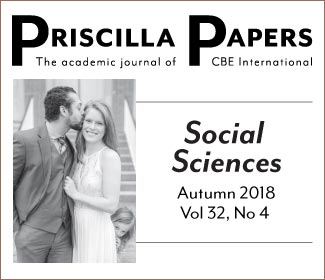 This article reports on a study of the ideologies and decision-making of Christian married couples. We specifically explored the beliefs these couples held regarding decision-making at the beginning of their marriages, those they currently hold, and what prompted any changes in those beliefs across time.

Individuals, churches, and organizations, such as CBE International, can benefit from knowing how Christian couples today describe themselves in terms of egalitarian or patriarchal ideology. In addition, when these couples report a shift, we can benefit from knowing the change agents responsible in order to maximize our efforts in bringing about equality in the home.

The 328 participants ranged in age from 18 to over 80 years of age, with the majority being young adults, ages 20–39. (See Table 1 for age distribution.) Surveys were completed predominantly by wives (84%). A variety of ethnic backgrounds were represented, although the vast majority (97%) were white. Income fell within a normal curve. The majority of respondents (82%) reported being in their first marriage. Length of marriages ranged from less than one year to over fifty years, with a higher representation (79%) of those married twenty or fewer. (See Table 2 for distribution of years married.) Most respondents had at least some college (26%) or were college graduates (61%).

The survey asked each participant to identify her or his beliefs about marriage, both at the beginning of their current marriage and at the present time. The options were as follows:

The husband should make the important decisions; the wife should submit to his authority.

The husband should make the important decisions while considering the wife’s opinion.

The husband and wife should work together, having equal input.

While we did not label them as such on the survey, these options were intended to exemplify extreme patriarchy, soft patriarchy, and egalitarianism, respectively.

For those whose beliefs had changed over time, we provided a list of possible reasons for those changes and asked that they choose as many as applied to them. They also had the opportunity to write in any reasons not listed. In addition, the survey included questions regarding which spouse makes day-to-day decisions in a variety of areas.

Each member of the research team recruited volunteer participants through Facebook. We utilized “snowball sampling,” which can be simply described as “convincing Facebook users to recruit their friends to join a study.”1 The request for volunteers included a link to our survey, which could be completed in approximately five minutes.

An egalitarian ideology was reported by approximately 76% (248 respondents) of the sample and a patriarchal ideology by 24% (79). A predominantly egalitarian sample was revealed by the finding that most couples reported making decisions together in a wide range of areas, such as creating a budget, where to vacation, when and where to purchase vehicles, where to live, whether/where to attend worship services, and decisions regarding children. (See Table 3 for the complete list.)

As expected, however, some decision-making fell along traditional lines, with husbands, for example, being more involved in deciding where to have vehicles serviced and wives being more involved in meal planning. Even for those areas in which most couples worked together, traditional gender roles emerged in households where the decision-making fell to one spouse or the other (e.g., husbands making decisions regarding household repairs, wives taking on responsibility for doctor selection and making doctor appointments). (See Table 3.)

Approximately 19% of participants (62 respondents) reported that their ideology had changed over time. Of these, 30 reported a shift to egalitarian ideology; 6 from extreme to softer patriarchy; 24 from an egalitarian to patriarchal ideology, and 2 shifting from a softer to more extreme patriarchy. Thus 26 moved toward, and 36 away from, patriarchy.

For couples whose ideology had become egalitarian and for those shifting from an extreme to softer patriarchy, the primary reasons cited were:

A realization that each person had decision-making abilities (21 respondents)

That two minds are better than one (12)

That they had learned from others (8)

That they were having problems in the marriage (7)

A belief that the Bible teaches equality (7).

For couples whose ideology had shifted from egalitarianism to patriarchy, the primary reason given was a belief that the Bible teaches male leadership (22 respondents) with a few stating that they had learned from others (5).

For those who moved from softer to more extreme patriarchy over the course of their marriage, reasons cited were believing that the Bible teaches that the husband should lead (2 respondents) and becoming educated on gender issues (1). (See Table 4.)

These findings provide encouragement as well as challenges to those promoting gender equality in the home. First, we can be encouraged to learn that a strong majority (76%) of this sample espouse egalitarianism and that this ideology is reflected in the day to day decision-making these couples exhibit.

We can also take heart from the finding that those who moved into egalitarianism over time did so, at least in part, due to their having learned from others. This finding highlights the importance of individuals and couples modeling egalitarian principles as well as organizations such as CBE International providing a community of mutuality through resources such as conferences, literature, and social media. Knowing that others are watching can encourage us to put forth our best effort in living out the beliefs we hold.

The fact that two primary change agents identified by those moving into egalitarianism were the realization that two minds are better than one and that each spouse has decision-making abilities indicates a healthy valuing of each spouse, which is the foundation of marital mutuality. In fact, the essence of mutuality was captured in the written response of one participant who stated that since the beginning of their marriage they had “learned to value and trust each other.” Also noteworthy is the finding that even among patriarchal couples, a realization of the abilities of each spouse had moved a few of them to a softer form of patriarchy. Given the salience of such responses, an important component of fostering egalitarianism in the home might very well be an emphasis on the development of the gifts and talents of each individual. For each spouse to value the other’s, as well as his or her own, contributions would help create and maintain a balance in decision-making within the home, even among those espousing patriarchal ideology.

The development of individual abilities can be promoted in a myriad of ways: from encouraging children to appreciate their own giftedness, regardless of gender, to providing ample opportunities for men and women to utilize those gifts within the home, the church, and beyond. As with any group, the family as a whole will gain strength from building up the strengths of its individual members.

It is noteworthy that the predominant rationale cited among former egalitarians who had shifted to patriarchy was the belief that the Bible teaches male leadership. For this to be such a prevalent rationale suggests that Bible study and education on egalitarian interpretations of Scripture should be a primary focus for those hoping to promote egalitarian ideology. In addition, it must be noted that twenty-two participants reported moving toward patriarchy because of the Bible while only seven reported moving toward egalitarianism because of the Bible. This strongly underscores the need for biblical education noted above.

Several limitations exist for the present study. The use of Facebook for recruitment presents the risk of attracting a fairly homogeneous sample (e.g., young people who are likeminded and of similar education levels with our research team). Using the “snowball sampling” described above, we attempted to enlarge our sample size, requesting that our Facebook “friends” share our call for volunteers. Our hope was that an increase in sample size would result in a more diverse sample of volunteers.

The education level of our sample, however, was more homogenous than we had hoped, for 61% were college graduates,2 which might account in part for the high percentage of participants reporting an egalitarian ideology. A more diverse sample in terms of education level would provide a broader picture of marriage ideology among couples today.

And while the political leanings of our sample ranged from “Very Liberal” to “Very Conservative,” more participants self-identified as being “Conservative” (40%) than “Liberal” (13%). However, that the majority of a conservatively skewed sample identified their marriage as aligning with egalitarian ideology seems remarkable and encouraging.

Finally, the vast majority (97%) of our participants were white, calling for future research to proceed with a more ethnically diverse sample.

Research with this Christian sample indicated strong support for egalitarian principles. Living out the ideology we profess, valuing each individual within the marriage relationship, and presenting biblical validation for equality were each highlighted as important agents for affecting change within this population.

2. In contrast, 33.4% of adults in the United States hold a bachelor’s degree. Reid Wilson, “Census: More Americans Have College Degrees than Ever Before,” The Hill (Apr 3, 2017).

PrevPreviousThe Experiences of Women in Church and Denominational Leadership
NextThe Delight of Daughters: A Theology of DaughterhoodNext