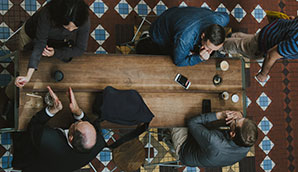 How to Deal with Sexism in Your Church

Not long ago, I served on an advisory board for a Christian organization. After a morning of listening to departmental reviews from operational staff, I shared my opinion on the notable differences in the last two presentations with a male fellow board member.

Sally, I’ll call her, gave a warm interpersonal overview of her journey into her new role and department yet did not provide us with much vision for where she planned to take the department. On the other hand, George, a young male director, provided clear vision for where he wanted to take the department and gave his perspective on what the CEO and founding chair needed to do differently.

My board colleague, a Gen X pastor, chalked the difference up to divine destiny. He noted: “Well, it’s no surprise to me that she couldn’t articulate her vision, because God, after all, made men to be the visionaries.”

He invoked a stereotype I had not heard of before—that God implanted vision in men and not in women. That was a new and significant assumption to me, especially given the work I do as a leadership consultant and pastor.

After looking around for the hidden cameras because I knew, surely, we must be on some Christian reality show, I asked if he was serious. Then, I probed a little deeper: “You mean to tell me that you believe God gifted men with vision, and withheld that gift from women?”

This stereotype is one example of the age-old gender prejudice that hinders women from serving fully in our churches, organizations, and companies.

In 2005, Catalyst Inc, a nonprofit consulting group specializing in gender issues, published a report entitled, “’Women Take Care’ and ‘Men Take Charge:’ Stereotyping of U.S. Business Leaders Exposed.” The report revealed that top corporate leaders thought women were better at the more relational dimensions of leadership and men the more strategic dimensions of leadership. Women were pegged as the nurturing, caring leaders but were seen as not able take charge and, well, lead. Due to this and similar gender stereotypes, women’s advancement into more senior levels of leadership was hindered. Things haven’t changed much in thirteen years.

Many women leaders and pastors have been hurt and limited by gender stereotypes. They restrict the use of our gifts and place us into our designated boxes regardless of our interests, expertise, or potential. Sadly, the church is often a space where gender bias against women leaders is excused and enabled.

As a woman leader in the church, you will likely experience gender stereotypes or prejudice at some point. If you find yourself on the receiving end of a stereotype as a woman, here are some things you can do to address that bias.

1. Keep Calm and Carry On

Stereotypes are rooted in cultural bias. While a stereotype may be directed at you, it’s not about you, per se. Prejudice against women leaders is actually about the other person buying into a system of conscious and unconscious inequity based on gender.

So, try not to internalize their bias whenever possible. It’s natural to be hurt and upset when someone subjects you to a stereotype, and their prejudice needs to be addressed. But it’s also important to think reflectively and prayerfully and to choose your inner-response wisely.

Back to my interaction with my fellow board member—I asked how he had come to believe men were the designated visionaries by God. His belief was rooted in his interpretation of Scripture, and specifically the Genesis account of God making Adam before Eve.

Without getting into a scriptural volleyball match, I asked how he reconciled the creation account in Genesis 2 with Genesis 1, where God gave both man and woman stewardship of the earth. I needed him to begin to think about his own inconsistencies and whether there was any scriptural support for his beliefs about men and women.

You too will have to ask questions and discern the underlying roots of bias against women pastors and leaders. Patriarchy’s roots run deep in some theological perspectives, traditions, and misinterpretations of Scripture. Asking questions will encourage Christians who have patriarchal ideas about gender roles to examine their biblical assumptions.

I met with the organization’s president to ask how it handled misguided gender assumptions. The president then helpfully shared the policies in place to ensure equality for the men and women who served there.

When you encounter prejudice—whether that be due to gender, race, class, ability, or something else—speak with a trusted advisor, mentor, or pastor about the patterns you’ve observed. Discuss what you believe those patterns indicate, their impact on you and other women, and even their consequences for men. Find out what policies exist to protect and empower women and ask your organization or church to be transparent about them.

Some example of questions you might ask: What practices and policies are in place to ensure women’s voices are heard equally in meetings? How are guest speakers selected (i.e. number of male and female speakers)? How are gender issues handled in small group curriculum and sessions?

From years of leading women’s trainings in corporate settings, I have learned that women who live, work, and worship in male-dominated systems and spaces need safe places to both tell our truths and develop support strategies for addressing sexism.

Request that the church you attend or organization you work with create a safe space for women to share their experiences with gender injustice and explore strategies for addressing gender bias. Talk with and garner the support of church leaders as well as male allies. Invite women of different backgrounds, expertise, and gifts to join the group and share their stories.

A study in the Philippines found that 54% of women respondents believed that women who worked were pushy! And according to Harvard’s Gender Implicit Association Test (IAT), both men and women associate men with science and having a career more than women. These statistics illustrate a stereotype about professional women held by men and surprisingly, also by women.

The findings of many similar studies on gender and women in the workplace suggest that assertive or strong women are generally regarded as pushy or aggressive; that women aren’t expected to excel at math or science; and that many people (especially Christians) still believe that a woman’s place is in the home. These unfounded beliefs are held by men and women.

Too often, women have internalized gender bias against females, and colluded with a sexist system that holds other women back. When you encounter gender bias in the church, make sure to examine and challenge your own assumptions about your and other women’s gifts and abilities.

Women inevitably face sexism in the church. We need tools to identify and address gender prejudice when we see it in our churches. Ultimately, if we want to see a more equal and just broader culture for women and girls, we have to start with our faith communities.

Dr. Jeanne Porter King is a contributing writer in CBE’s latest book, Created to Thrive: Cultivating Abuse-Free Faith Communities, which brings together experts and faith leaders to tackle topics related to abuse. Created to Thrive equips churches to respond wisely to reports of abuse and create safe spaces where all can flourish, and it explores the dangerous consequences of women’s devaluation and how theology can perpetuate abuse. Learn more here.