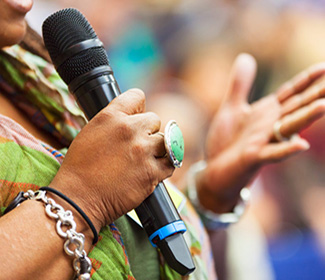 A Feminized Church, or Just a Faithful One?

If you’ve been around the evangelical world for long, you’ve probably heard people theorize about why more women than men go to church. One popular suggestion (and complaint) is that the church is too feminized, so men aren’t interested. Too much talk about intimacy and community and lovey-dovey Jesus. Not enough talk about sports and trucks and strong, powerful Jesus.

Given the seemingly endless sports metaphors that rain down from American pulpits, one wonders what exactly is too feminine about church. The touchy-feely songs? Turns out a lot of them were actually written by men. I believe the real issue is this: the very essence of Christianity is incompatible with our current culture of masculinity.

American masculinity, and its Christian form, “biblical manhood,” are defined by power and entitlement. We are told that men have the final say, and women are to submit. Any challenge to a man’s power is branded “disrespect” and justifies almost any response, even if violent. Men are entitled to sex. When they violate women and the law to get it, we excuse them, saying the woman is at least partly to blame, and it’d be a shame for one mistake to alter the man’s bright future.

Men learn that manhood depends on avoiding “feminine” things. This is

the reason why men won’t drink ‘diet’ soda and have had to have differently-named low-calorie versions marketed specially to them.  It’s the reason why men resist using lotions and moisturizers even if they have neutral, non-flowery scents, and why some companies advertise their products by denigrating competitors with such words as “precious” and “princess.”

No wonder so many men are so concerned about a feminized church.

Contrast this with what Jesus taught on a hill in Galilee (Matt. 5–7). He spoke of a new kingdom that belonged to the poor, the meek, the outsider, the peacemaker, the merciful—opposite of those who hold power in the world. Jewish and Roman power-brokers recognized Jesus’ teachings as a threat to the established order and executed him. But he defeated their power in resurrection and called us to carry on his work. Is it any surprise that the early church attracted the same kinds of people Jesus did—women, the poor, the sick, the outcast?

As the body of Christ and the earthly manifestation of God’s kingdom, the church should be allied with the vulnerable and powerless. The very premise of the church is a community that values all people fully and invites them to experience full humanity in vulnerable relationship with God and each other. We are to be the antidote to sexism, racism, classism, and any other forces that elevate one group of people over another.

This isn’t easy for those of us with power and privilege to accept. That’s why Jesus said it was easier for a camel to pass through the eye of a needle than to enter the kingdom of God. The same might be said for a man whose identity is built around power and entitlement. Jesus didn’t revise the Sermon on the Mount to appeal to the powerful. He told them to lay down their power and follow him. Likewise, we don’t need more men in pulpits saying and singing manlier things. We need communities where men have to lay down their privilege and follow Jesus.

We need churches planted and led by women and men who are devoted to rooting out patriarchy and all forms of oppression. Then we will see the church become more like Jesus. Women in church leadership are in the business of being Christ in the world and calling us all to do so as well.

If that’s “feminized church,” then so be it.

A version of this article appeared as the editorial to the Winter 2018 edition of Mutuality.