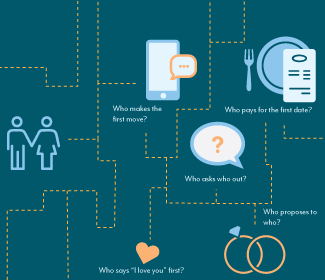 Choose Your Own Adventure: A Very Egalitarian Proposal

“I’m dead set against being proposed to at a restaurant,” I informed my boyfriend.

“I’d love a glass of champagne on the house,” I continued, “but it’s just too public. Too cliché.”

Justin and I had been friends for several years but we had only just begun to date a few months before. I felt bold in broaching the topic, but his response was just one more affirmation that I had found my life partner.

“Well, since we’re talking about it,” he said, “I don’t want to be the only one proposing; I’d like to be proposed to and wear an engagement ring as a symbol of my commitment, too.” Be still, my heart.

Over bowls of ramen, we decided June would be the perfect month to get married. After we left the restaurant, we skipped—literally skipped—down the sidewalk. Only then did it occur to us that we needed to actually get engaged before planning our wedding. So we picked a “mutual proposal day” and began dreaming up our plans.

I knew exactly when Justin would slide a ring onto my finger (and when I would do the same for him), but we kept our engagement almost a complete surprise from our friends and families. There was one exception. As the date approached, I sat down with my parents and told them Justin and I were talking about getting married. When I was a teenager, my father expressed how honored he would be a young man asked him for my hand in marriage someday (though I always knew Dad would say the choice was mine). Recalling this, I preemptively told my father that Justin wouldn’t be asking for his permission. I don’t align with some of my dad’s traditional views, and at thirty-five years old I was hardly fresh out of my parents’ home. Still, I didn’t want to ignore my dad’s desire entirely. I wanted it to be clear that although Justin and I were stepping toward marriage without soliciting permission from my father, we respect and love my parents. They were understanding and happy for us.

We arbitrarily split our proposal day in half: Justin was responsible for concocting surprises for me during the first half of the day, and I would plan surprises for him during the last half. That morning, Justin arrived at my apartment and we set out to follow his plan. He took me to a series of locations that had been important to us. At each place, he gave me a small gift symbolizing something he valued about us as a couple and something he hoped we would carry into the future.

For one stop, we visited the “peace trail” that encircles our church, where we had several significant conversations early in our relationship. At each of the twelve peace poles along the path, we stopped and Justin reached into his bag, pulled out a gift, and told me what it meant. A dreamcatcher because we support each other’s dreams. A handful of small charms that said “Go Team!” because we’re in this together. An “O Captain, My Captain” poster from Dead Poet’s Society, because he believes in me as a professor and is willing to move for my pursuit of a PhD. The pilgrimage culminated at the trail’s prayer labyrinth. In the very center—where we as individuals and as a couple had promised to keep God at our center—he got down on one knee and proposed. I wept with unmuted joy.

After a celebratory brunch, Justin and I embarked on the next leg of the adventure. Since I am just as inclined toward symbolism, each element of my plan was also imbued with relational and/or spiritual meaning. We took a walk at a wildlife refuge where I had given him a homemade “Choose Your Own Adventure” book, and told him I was ready for the dating chapter of our story. In that same spot, months later, I gave him a photo album highlighting the adventures we’d since been on. At a paint-your-own pottery shop, I told him I wanted to create things with him for the rest of our lives.

Knowing that our life together would be marked by both bliss and struggle, I endeavored to encapsulate both themes. I had planned for us to stand together inside a tornado simulator at the science museum, but it was closed. As it turned out, however, heavy traffic made us late for our blissful foot massage appointment, so we were able to squeeze in some practice at weathering storms after all. At the end of the day, I rolled out a picnic blanket in a vineyard and got down on one knee. Actually, I got down on two knees at first because I was so anxious and excited that I forgot the one-knee tradition. I proposed to Justin and slipped a ring on his finger after his tearful “yes.”

Justin and I were as intentional with our engagement as we hoped to be in our marriage. Admittedly, our proposal day was elaborate. With activities stretching from morning coffee to a late-night dinner after we had both said “yes,” our engagement was probably more extravagant than many people’s. That doesn’t make ours better. Importantly, it fit who we are as individuals and as a couple. We’re both deep-feeling, meaning-making, symbolism-loving romantics, so our proposal day was a reflection of the steps we want to take as individual dancers in our marriage pas de deux.

As a professor at a Christian university and a spiritual director, I meet many people who desire Christ-centered, egalitarian partnerships. Yet they often aren’t sure how to build that desire into the early stages of their relationship. They may have mentally sketched out an image of shared household chores and child-raising tasks, but have given little thought to what those convictions look like in action and in major moments such as becoming “official” with a significant other, a marriage proposal, or a wedding. This is no surprise. In both Western Christian and secular culture, there are few models for when a man and a woman get engaged that include anything other than a man “popping the question” to a surprised woman. But it doesn’t need to be this way. We are free to embrace traditions that fit us as individuals and as couples. We can also forge new paths and practices. I offer our proposal story as one example of an alternative way forward. Naturally, people have asked questions about our unconventional engagement.

“Didn’t you feel sad that Justin didn’t surprise you with his proposal?”

When Justin got down on one knee—on the day we chose months before—and opened the box to reveal the ring we picked out together, I didn’t feel a rush of dumbfounded amazement. But I didn’t miss that at all. The joyful expectancy of our special day was a tremendous gift—as was the chance to pour my energy into creative expressions of my love for Justin. He and I also kept our plans a secret from each other, so surprise still marked the day.

On an ideological level, mutually agreeing upon the date of our proposal and splitting the day in half allowed us to practice our commitment to sharing power and responsibility in our marriage. One can argue that the Western tradition of a man proposing to a woman is about giving men an opportunity to shower the ones they love with lavish affection. But this tradition can also imply that men have the sole power to determine if, when, and how proposals happen (which can also set a precedent for the couple’s future decisions). We chose to share in that agency.

“What was the point of proposing if you already knew you’d both say yes?”

Good question, but let’s think about the alternative. I wouldn’t want someone to propose to me if he didn’t already feel confident I’d say yes. If he had to persuade me, or if I needed time to think it over, I’d probably conclude that either he wasn’t the right person for me, or he and I weren’t on the same page concerning timing. Justin and I each knew we wanted to be married to each other and we knew we were ready. Our proposal was about affirming and celebrating the love we had grown and intended to keep growing together.

“Did you feel masculine when you got down on one knee and proposed to him?”

I don’t make it a goal to feel “feminine” and neither does Justin strive to be “masculine.” We just want to feel like ourselves. When I was down on one knee, telling the love of my life how much he meant to me, I felt like myself. Like an exploding-with-excitement-and-gratitude version of myself.

Living with intentionality is difficult. It is easy to become zombies on treadmills, going through the motions of life without actually considering why we are doing what we are doing and whether we want to be doing those things. Granted, seeking to saturate each moment with purpose will likely rob of us of the delights of spontaneity. Further, guilt about not living “well enough” (or egalitarian enough!) could fester into shame. So we must choose where we will press into intention and where we will give ourselves grace. During our season of dating and considering marriage, Justin and I decided that our engagement would reflect our commitment to equality. This was where we chose to press into intention. For those dating couples who long to deviate from the more traditional proposal model, I hope our story gives you inspiration and courage to blaze your own trail.

Tweet
PrevPrevious4 Jobs Women Are Expected to Do without Pay, and How to Balance the Labor Scale
NextReflect With Us: Words of FreedomNext